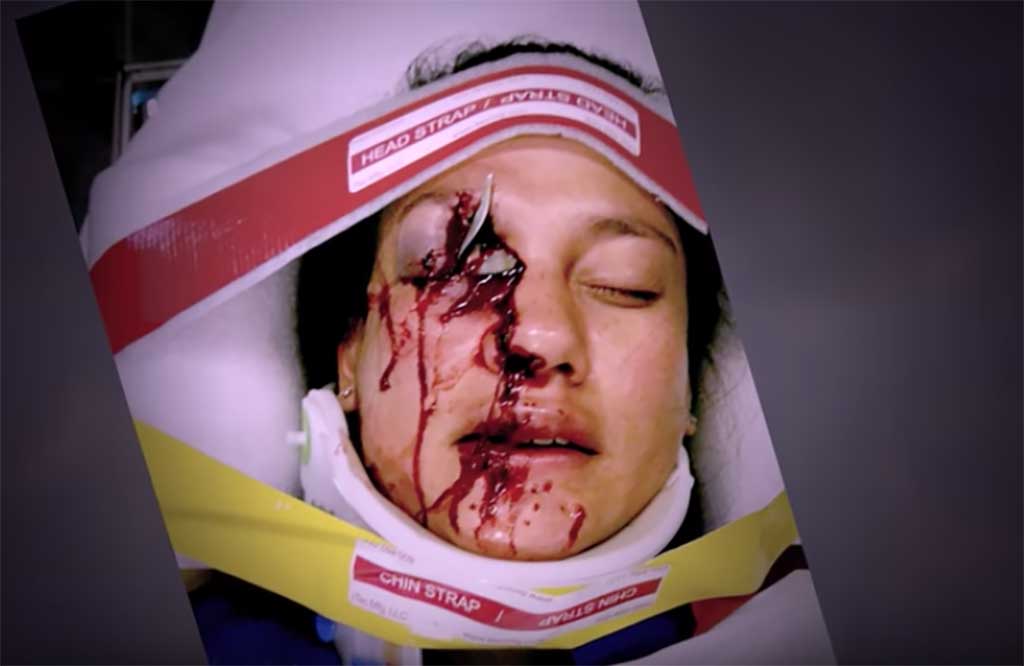 The danger is that when the airbag deploys, you might get metal shards that explode towards your face, possibly killing you, or severely injuring you, including your eyes.

it’s serious.  Just watch the video of what happened to the following survivor.

What do I need to do?

It’s simple. Check to see if your vehicle needs a repair.  If you do, take it as soon as you can to your local Honda or Acura dealership.  The repair work is free.

How do I know if my Honda or Acura needs repairs?

Check Your Own Honda or Acura:

Are the repairs free?

YES.  The repairs are 100% free.  Even if your car has surpassed its manufacturer’s warranty.  You will have the inconvenience of having to go to the dealership and the actual repair time required to fix your vehicle. But the time taking your vehicle is well worth avoiding any risk to you or one of your passengers.

CBS 4 Miami is also covering the seriousness of this issue.  Watch their full report below:

Is Honda taking this seriously?

YES.  It’s bad business for Honda owners to be maimed or killed.  Below you’ll find an official statement from the Executive Vice President of Honda North America.

Thank you, Mr. Chairman, Ranking Member Blumenthal and members of the subcommittee. My name is Rick Schostek, executive vice president of Honda North America, Inc. It has been more than two and a half years since I last appeared before the full Commerce Committee. I want to thank you for this opportunity to update you on Honda’s progress in addressing this serious safety issue within our industry and to address the critical work that remains before us.

I want to begin by saying that we extend our most sincere and heartfelt sympathies to those who have been injured or have lost loved ones due to the rupture of a Takata inflator in one of our vehicles.

During the past three years, a truly passionate group of people at Honda have attacked this issue relentlessly, with their best thinking and greatest energy, including contacting our customers more than 150 million times to alert them to this recall. Our dealers have also responded to this challenge, working in a productive collaboration with us. As a result, we have replaced or accounted for nearly 14 million of the total inflators under recall, which represents a completion rate of over 72 percent.

This is far ahead of the rest of the industry and reflects our extraordinary effort to reach out to customers, our commitment to have replacement parts available, and the work of our dealers to quickly repair vehicles. Due to our focus on taking care of our customers, we moved quickly to find and locate new sources of replacement inflators, and we have had no backorders on replacement inflators since October 2016. We also are grateful to our customers who have already responded to the recall and had their vehicles repaired. While we are proud of our team’s effort, we do not view it as an achievement to celebrate. It is our responsibility as a manufacturer.

Since my last appearance before you, six people have lost their lives in the U.S. due to ruptured Takata inflators in our older model vehicles. One of these incidents involved the rupture of a Takata inflator that was not part of the original equipment installed in the factory and was not installed by one of our dealers. Instead, it was repaired independently, with the inflator sourced from a salvaged vehicle. These incidents bring to 13, the number of deaths that have occurred in our vehicles in the U.S. related to Takata inflator ruptures.

In most recalls, companies tend to rely on one or more letters addressed to the last known address of the vehicle’s owner to provide notice of the defect. However, given the risk and breadth of this recall, we have gone far beyond that. This includes:

We want to thank those companies that have supported these efforts because, despite our request for support from insurance companies and others who are in regular communication with affected customers, the challenge of reaching owners has been left largely to the automakers.

Another unique and important initiative Honda took was based on a relationship that was formed during my first appearance before this committee on November 20, 2014. Just prior to the hearing, I had the humble honor to meet Stephanie Erdman, who was the victim of a Takata airbag inflator rupture in one of our vehicles and sustained serious injuries. What began with an awkward conversation evolved into a joint effort to help save the lives of others.

First, we co-authored an op-ed commentary to encourage legislative action on an important opportunity to increase recall rates. Then, last fall, we collaborated on a new public service announcement in which Ms. Erdman courageously shared the story of her accident and injuries in order to prevent other drivers from having the same horrific experience. Honda used social media to target this PSA to almost seven million owners of unrepaired vehicles, and millions of people have seen it on YouTube. I would like to share one version of this PSA with all of you.

We created several versions of this PSA, of varying lengths and content, as well as in Spanish and English. We also have made it available for use by NHTSA and automakers and other stakeholders free of charge. And a number of companies have already signed agreements allowing them to do so.

This Committee put Ms. Erdman and me together. Since then our relationship has been a unique collaboration that we hope has saved lives. And we all owe her a debt of gratitude for her selfless effort to use a deeply personal tragedy to help others.

It is critical to understand that the majority of the 13 fatalities in our vehicles were due to the so-called “Alpha” inflators, found in certain 2001 to 2003 Honda and Acura models. These Alpha inflators were found by NHTSA and Takata to have an alarming rupture rate of as high as 50 percent.

Given the extreme risk posed by the “Alpha” inflators, last year we began a nationwide grassroots outreach effort to physically locate hard to reach owners of Alpha vehicles who have not responded to our prior recall outreach efforts. This initiative involves sending dedicated teams of Honda representatives nationwide, some 550 in total, who are physically knocking on the doors of customers, already more than 600,000 times, in the effort to assist them with scheduling and completing recall repairs. An effort like this is unique, and we will evaluate its effectiveness in meeting our goals and expectations.

In total, we now have more than 400 people in our customer contact center working on the Takata recalls, and 135 of those agents are dedicated to tracking down vehicles with Alpha inflators. To be clear, that’s all that these people do, day in and day out, in a dedicated effort to save lives and prevent injuries to our customers.

Based on all of these efforts, from a population of almost 1.1 million vehicles with the higher risk Alpha inflators, only about 62,000 remain on the road to be tracked down and repaired. This represents a completion rate of 94 percent. Considering that research shows recall completion rates for vehicles in their 10th year of ownership hover at about 33 percent… and the Alpha vehicles in question are 15 to 17 years old… our efforts thus far represent an extraordinary accomplishment.

But we aren’t satisfied with this result. We are committed to continuing our effort until we replace or account for all of the defective Alpha inflators.

This recall effort has really been uncharted territory for Honda and for our entire industry. As I have noted, we have tried a number of new ideas and methods in the effort to find customers, to notify them in a way that will get their attention, and then to convince them to complete the recall.

Through the course of our efforts on this unprecedented Takata inflator recall there have been a number of lessons learned. Together with our dealers, I think we are good at repairing vehicles. But finding and convincing customers to complete recalls, especially for older model vehicles that are on their second, third or even fourth customer, is a difficult challenge.

When it comes to ensuring that customers are aware of and complete a safety recall, we remain convinced that the single most effective measure is to tie the annual state vehicle registration process to a requirement that safety recalls be addressed before that registration can be completed. This would be particularly important for vehicles that were recalled prior to the purchase of a vehicle by a subsequent owner who may not even be aware of the presence of an unrepaired safety defect. We believe there are numerous accommodations that can be made so that this requirement would not be overly burdensome to vehicle owners. While I recognize that this is ultimately the function of state governments, I proposed this idea in each of my prior testimonies because we believe it is the best opportunity to save lives.

Toward this end, I am excited to tell you that, later this week, the auto industry will announce the establishment of a new batch look-up tool that will make it much easier and faster to look up affected vehicles to support efforts to reach hard-to-find vehicle owners about an outstanding safety recall. Currently, anyone checking vehicles for a safety recall must look up one VIN at a time, which is inefficient and cumbersome. This new tool can look up large batches of up to 10,000 VINS at a time.

This new batch tool responds quickly, will be offered completely free of charge to DMVs, insurance companies, salvage yards, repair shops, new and used car dealers, and others who have touch points with vehicle owners. With this new batch lookup system, we are hopeful these stakeholders will become more active in helping to locate the owners of recalled vehicles requiring a repair.

Getting cars fixed is our responsibility. But this recall is an unprecedented public health challenge that requires unprecedented action from other stakeholders in the effort to find and notify customers. The insurance industry. The salvage industry. Used car dealers. DMV and state inspection authorities. And, given this Committee’s focused interest on motor vehicle safety, we ask that you encourage these industry and government sectors to use the new batch look-up tool to urge or require their customers to get safety defects fixed as soon as possible.

This is not business as usual for Honda. In my first appearance before this committee, I said we would do our very best to repair every car affected by the Takata inflator recall. This remains our commitment. And we will continue to dedicate ourselves to honor the relationship we have with our customers.