Ferrari has just revealed its latest in its special “Icona” line of supercars. The Ferrari Daytona SP3 is a mid-mounted 828-horsepower V12 superhorse. It’s called the Ferrari Daytona SP3, and it takes its name from the 1967 24 Hours of Daytona in which three of the brand’s race cars finished 1-2-3.And it takes its basic design and layout from similarly vintage mid-engine race cars. 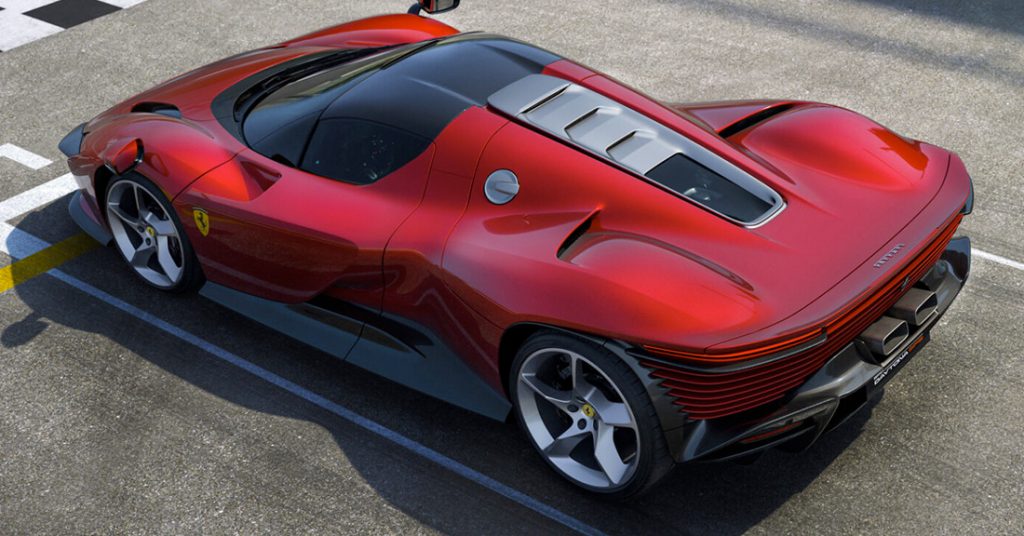 Ferrari’s new “high octane” model ends a long wait by lovers of its Icona-series cars, although it may not be welcomed by those trying to curb carbon emissions. With an 840 horse power, 12-cylinder (V12) aspirated mid-rear-mounted engine, the Daytona SP3 pays tribute to the Ferrari 330 P3/4, which dominated the 24 Hours of Daytona in 1967.

The Daytona SP3 will be produced in 599 units, with a not-for-everyone price of $2.26 million. Deliveries will start at the end of next year and are expected to be completed in 2024.

Ferrari’s Iconas are special series cars produced in limited numbers, reserved for ultra wealthy private collectors and inspired by legendary models from the past.

Recognized by its ‘Prancing Horse’ logo and red racing cars, Ferrari already has three electric hybrid models in its range, including the 296 GTB sports car it unveiled this year.

Ferrari has increasingly reserved its polluting V12 engines for limited series models and Iconas made up just 2% of the units it shipped in the last quarter, while V12 cars accounted for 12% of group shipments. It will make less than a combined 1,600 V12 812 Competizione and 812 Competizione A models, launched this year, with a starting price just under half a million euros ($564,000).

Although inspired by the stylistic language of 1960s racing cars, the Daytona SP3 is clothed in very undeniably original, modern forms. Its sculptural power celebrates and interprets the sensual volumes of sports prototypes to wholly contemporary effect. It goes without saying that a design this ambitious demanded a meticulously planned and executed strategy from Chief Design Officer Flavio Manzoni and his Styling Centre team.

From the wraparound windscreen back, the Daytona SP3’s cabin looks like a dome set into a sensual sculpture with sinuous wings emerging boldly either side. The car’s overall balance is underscored by monolithic volumes that are a powerful articulation of the long-appreciated skills of Italian coachbuilding at its finest. The fluidity of its masses melds effortlessly with sharper surfaces, to produce the sense of effortless aesthetic balance that has long been a signature of Maranello’s design history.

The clean double-crested front wings are a nod to the sculptural elegance of past Ferrari sports prototypes of the likes of the 512 S, 712 Can-Am and 312 P. The shape of the wheelarches efficiently connotes the geometry of the flanks. At the front, they are structural and create a powerful link between wheel and well by not completely following the circular profile of the tyre. The rear flank swells out from the sylph-like waist giving rise to a powerful rear muscle that wraps around the front of the wheels, then tapers back towards the tail, lending a powerful dynamism to the three-quarter view.

Another key element is the butterfly doors, which have an air box integrated into them to channel air to the side-mounted radiators; the resulting sculptural forms give the doors a pronounced shoulder housing the air intake that is visually linked to the vertical cut of the windscreen. The pronounced surface of the doors, whose leading edge forms the rear of the front wheelarch, also helps to manage the airflow emerging from the front wheels. This surface treatment also closely recalls that of cars such as the 512 S which partly inspired the Daytona SP3’s stylistic code.

To give the Daytona SP3 the most exhilarating V12 on the market, Ferrari chose the 812 Competizione’s engine as its starting point, but relocated it to the mid-rear position to optimise the intake and exhaust layout as well as fluid-dynamic efficiency. The result is that the F140HC engine is the most powerful internal combustion engine ever built by Ferrari and deliver a massive 840 cv with the typical exhilarating power and sound of a Prancing Horse V12.

The engine has a 65° vee between its cylinder banks and retains the 6.5-litre capacity of its predecessor, the F140HB, sported by the 812 Competizione from which it inherits its upgrades. All the developments enhance the performance of a powertrain that sets the new benchmark for its category thanks to its astonishing soundtrack – obtained through targeted work on both the intake and exhaust lines – and the 7-speed gearbox, which is now even faster and more satisfying than ever thanks to the development of specific strategies.

Maximum revs of 9,500 rpm and a torque curve that rises rapidly all the way up to maximum revs gives occupants the feeling of boundless power and acceleration. Particular attention was lavished on reducing the engine’s weight and inertia by adopting titanium con rods, which are 40% lighter than steel, and the use of a different material for the pistons. The new piston pins have a Diamond Like Carbon treatment (DLC), which reduces the coefficient of friction to improve performance and fuel consumption. The crankshaft has been rebalanced and is now also now 3% lighter.

The Ferrari Icona series was launched in 2018 with the Ferrari Monza SP1 and SP2, which were inspired by the competition barchettas of the 1950s that helped earn the marque its legendary status in motorsport with a string of prestigious victories. The Icona series celebrates Ferrari history by reinterpreting the timeless styling of the marque’s most iconic cars to radically modern effect using the most innovative materials and technologies available today.

The idea of taking inspiration from a particular time in history, which lies at the core of the Icona concept, goes much further than merely reusing styling cues from the past. Rather the aim is to distil the very essence of an era and using it as a spring board to create new concepts that themselves are unique enough to become icons for future generations. The Icona cars all boast exclusive solutions not seen in the rest of the range and are aimed solely at Ferrari’s top clients and collectors, proud ambassadors for the Prancing Horse marque.