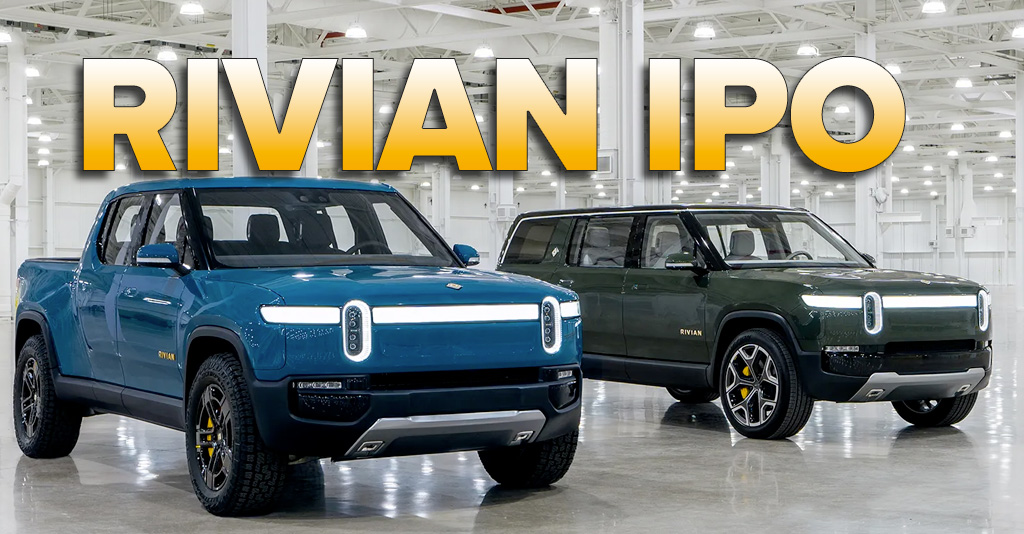 RIVIAN’s stock soars.  The stock closed yesterday at $100.73.  As of this morning’s update, it’s trading at $110.92.  This puts RIVIAN’s market cap ahead of General Motors and Ford.  It also says that investors are betting big on the RIVIAN trucks, SUVs, and commercial vans.

The all-electric supertruck maker’s public offering comes with risks, but includes a sweet deal with Amazon.

It’s one of the decade’s largest IPOs, offered by an upstart automaker many have never heard of, which could raise over $8 billion. No doubt, Rivian has created a small fleet of amazing trucks loaded with remarkable power, technology and flexibility — and they’re ready to roll. Rivian emerges ahead of the pack, and will likely set the bar for the coming herd of electric trucks. But the question is — as the question always is — can they manufacture and deliver at scale.

The Rivian IPO is scheduled to price on Tuesday, November 9, 2021 and trade the next day, November 10, 2021, a person familiar with the situation said. Rivian has made a tiny chunk, 0.05%, of its shares available to retail investors via SoFi’s online brokerage platform. The company, which is backed by Amazon, noted in the filing that it plans to offer 135 million shares at a price between $57 and $62. Underwriters also have an option to buy up to 20.25 million additional shares. If underwriters exercise that option, Rivian would raise as much as $9.6 billion. Rivian’s filing was been one of the most anticipated of the year; now attention has turned to its public debut on the Nasdaq exchange. Rivian will trade under the ticker symbol RIVN.

Based on the number of outstanding shares, that would put its market valuation at about $53 billion. If employee stock options and other restricted shares are considered, Rivian’s valuation could be as high as $60 billion.

So who is Rivian and why all the buzz? A little history. The company was founded in 2009, launching its first vehicle – the R1T – in September of that year. This high-tech pickup tows up to 11,000 pounds, races from 0 to 60 mph in three seconds, and delivers an outstanding range of 314 miles.

Today, Rivian offers the R1 at a starting price of $67,500. Its optional accessories include a Camp Kitchen, with induction cooktops and a water tank for washing dishes, that slides out of from the side of the truck. This tuck is cleverly designed and built like a tank. Future plans include a rollout its R1S, a seven-passenger SUV built on the R1T’s battery and propulsion system, in December for $70,000. You can fold the R1S’s seats for up to 105 cubic feet of cargo space. While the R1T isn’t quite a full-size pickup and larger than a compact truck, its design delivers thoughtful use of space.

The interior is spectacularly sparse, with a lightly finished ash wood dashboard and 15.6-inch landscape-oriented infotainment display — and a 12.3-inch digital instrument cluster. A center console splits the two front bucket seats, while the three-across rear bench has a fold-down armrest with roll-door access to the R1T’s gear tunnel. Rear-seat passengers also have a 6.8-inch screen of their own mounted on the back of the center console.

In short, this is one hell of a pickup.

First out of the gate

Surveying the pickup landscape and given the industry’s big names plowing so much into EV cars and trucks, it’s slightly surprising that the 2022 Rivian R1t will be the first electric pickup truck to hit the market—ahead of the 2022 GMC Hummer EV, the 2022 Ford F-150 Lightning, the delayed Tesla Cybertruck, and an electric Ram (not expected until 2024). They beat the big boys to the punch! 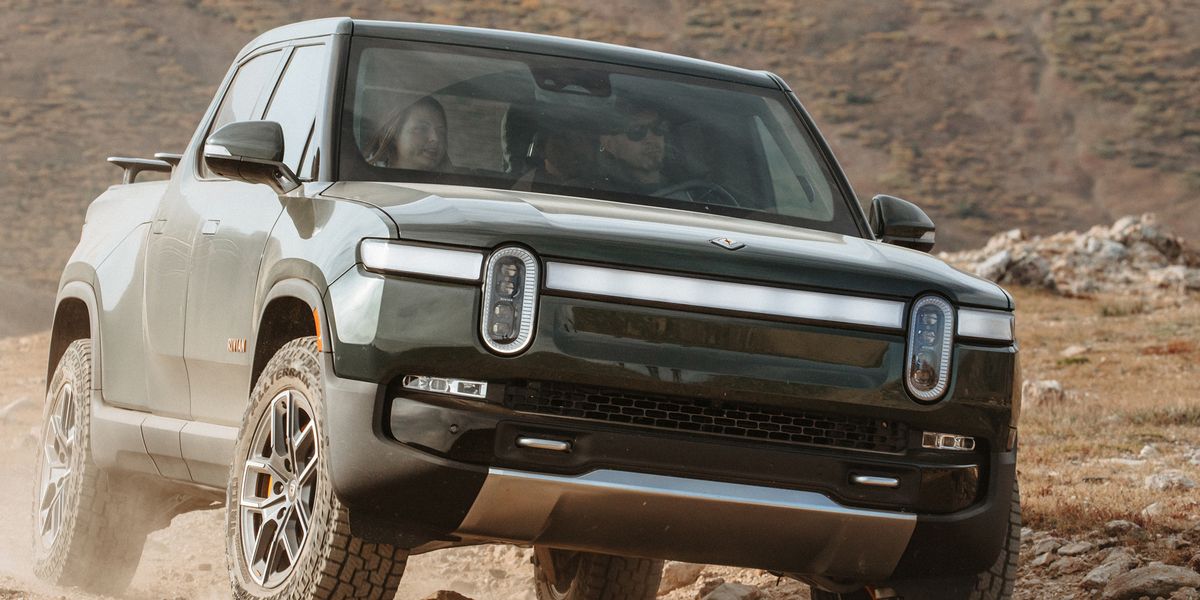 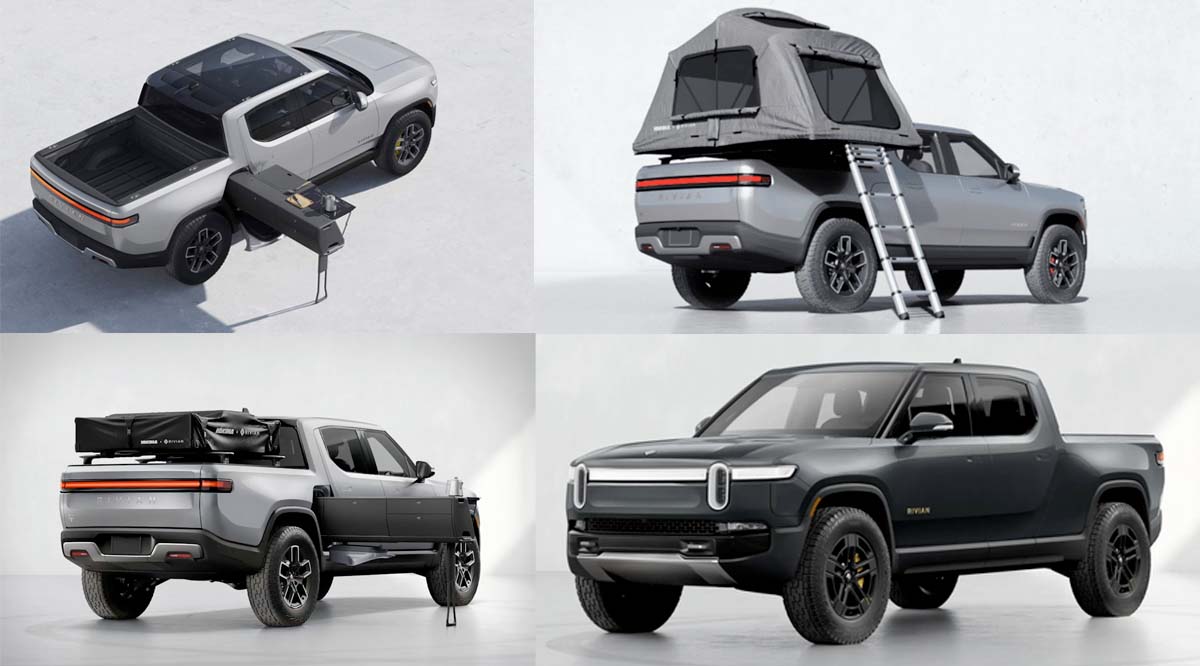 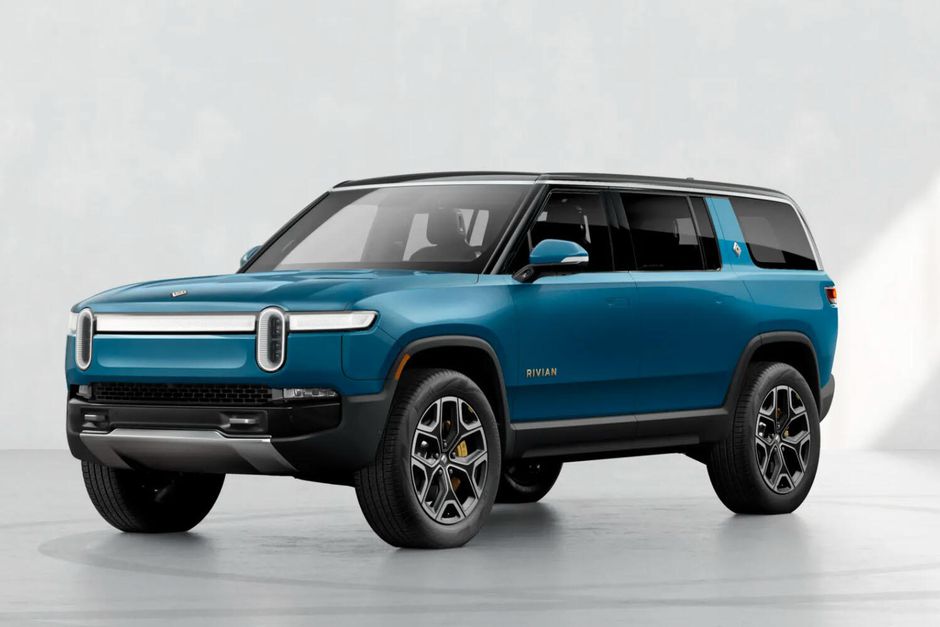 Both Rivian vehicles come with the advanced Rivian Driver+ safety system, which has hands-free driving assistance and is updated over-the-air. The Rivian includes 11 cameras, 12 ultrasonic sensors, five radars and a high-precision GPS antenna. This system generates substantial amounts of data, which improves the artificial intelligence built into the system.

Rivian has become an attractive IPO because its vehicles are fully ‘home grown,” doing virtually everything in-house: designing and building vehicles, financing and selling them through its own dealerships, teaming up with major insurers to offer its own auto insurance, maintaining vehicles’ hardware and software, and even providing fleet management software for large business customers. By keeping all those operations under one roof, Rivian estimates that each vehicle it sells will bring the company an additional $10,000 to $15,500 for software, $8,700 for insurance and financing, and $3,500 for vehicle service revenue over its lifetime — all of which will likely deliver higher margins and generate more profit than building and selling the vehicle.

Rivian is currently on the leaderboard when it comes to commercial trucks, which are part of its collaboration with Amazon.​ The e-commerce giant invested $1.3 billion in Rivian and agreed to an initial order of 100,000 vehicles, with the first delivery beginning in December of this year. Rivian expects to deliver up to 10,000 vehicles by 2022 and the rest by 2025. The contract prevents Amazon from purchasing anyone else’s delivery vans for four years, and Rivian will need Amazon’s consent to sell vehicles to other customers. While both companies have skin in the game, the Rivian’s IPO is banking heavily on this partnership.

The electric revolution has begun. Rivian electric vans are part of Amazon’s Climate Pledge investment. Amazon led a $700 million investment round in Rivian in 2019 as part of the Climate Pledge agreement it co-founded. The agreement commits to achieving net-zero carbon emissions by 2040, 10 years earlier than the Paris Accord’s plan.

A recent filing by Amazon shows the e-commerce giant already holds a 20% stake in Rivian. 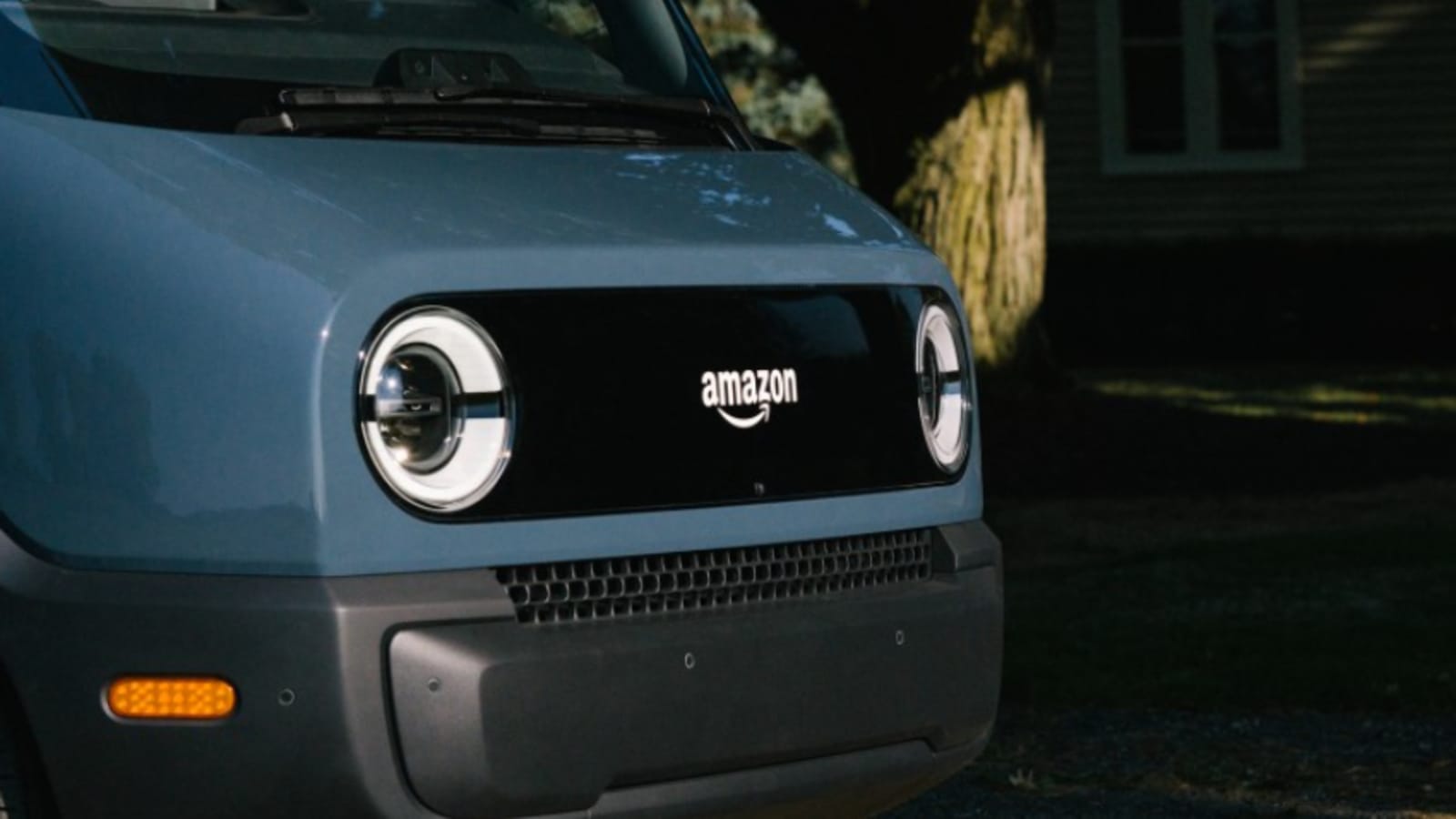 What’s next for Rivian?

As is the case for all newly minted car companies, the risks are great and the numbers are huge. For the first half of this year, Rivian burned through $851 million in operating cash flows. But with $3.7 billion in cash on hand and the anticipated influx of capital from the IPO, the company should have enough financial resources to sustain itself for the next few years without taking on more debt or diluting investors.

Rivian faces other issues, though. Ford which is an investor in the company, plans to launch its own F-150 Lightning EV in the spring at a far cheaper $39,974 starting price. The F-150 Lightning’s preorders hit 150,000 last month, and Ford is ramping up production.

Rivian’s advertising relies on earned and shared media exclusively. They’ve avoided traditional media buys thus far. Tesla proved this to be a winning strategy, but Rivian lacks “the Musk factor”, a charismatic leader to keep it in the news. Founder and CEO R.J. Scaringe has attracted just 46,600 Twitter followers, compared to Tesla CEO Elon Musk’s 60.9 million. Musk’s antics, bravado, and stunts may seem outlandish, but he has transformed Tesla into a fast-growing automaker that has upended the industry. In contrast, Scaringe’s has little or no media presence and it remains to be seen if personality can emerge as part of the mystique of the Rivian.

Even though the Amazon contract will be the main growth catalyst for Rivian, the relationship features risks. As Tesla and Nio, have discovered, manufacturing highly technical vehicles can be challenging and prone to costly delays. Over the past year, Rivian delayed the R1T twice because of the COVID-19 pandemic. Now the company must navigate other hurdles like semiconductor shortages and supply chain disruptions that plagues the global auto industry.

For an IPO of its size, the Rivian deal is out of the ordinary. The company still hasn’t brought in any revenue, and it depends heavily on a single customer, Amazon, a major investor.