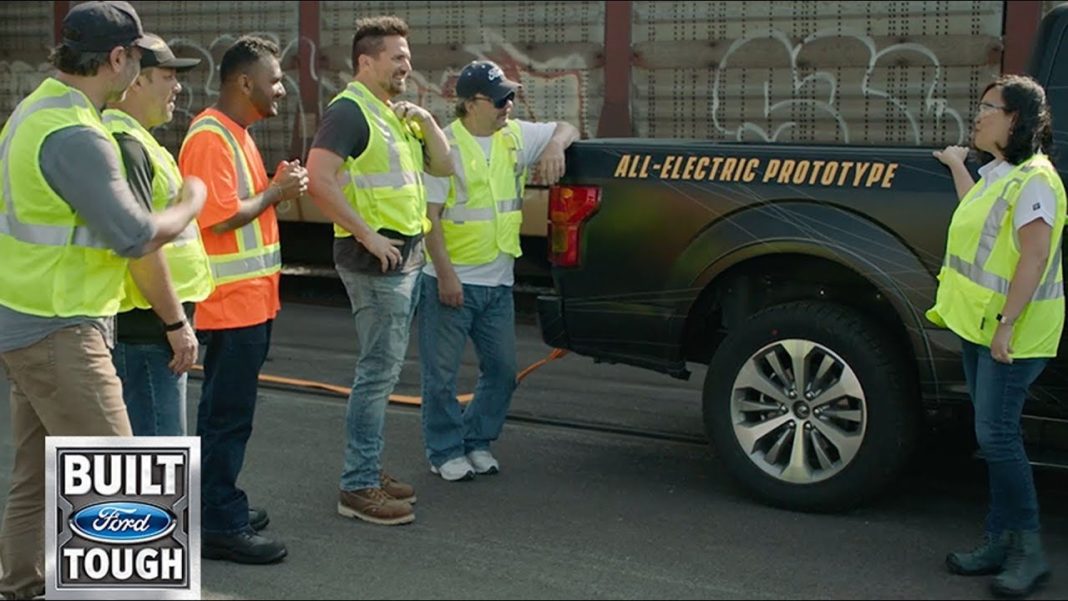 In an era where pickup trucks can cost close to 6 figures, Ford has announced a fully functional, all electric F-150.  Check out the video produced by Ford Motor Company showing an all electric F-150 towing a train loaded with 42 F-150s inside.

Literally towing over a million plus pounds.  It’s nuts!

Now of course, this is just a prototype.  As Ford says:

“We’ve confirmed we are bringing an all-electric F-150 to market. Now, we’re showing you the capability you asked for by having it tow more than 1 million pounds.*

This is Built Ford Tough. *The F-150 battery-electric prototype is towing far beyond any production truck’s published capacity in a one-time short event demonstration. Never tow beyond a vehicle’s towing capacities. Always consult the Owner’s Manual.”

The instant torque you get out of an electric powertrain will let you pull a house off it’s foundation.

Okay, that’s kind of extreme, but you can see the point Ford is trying to make.  If it’s strong enough to pull a train, it’s more than capable of pulling your boat, RV trailer, etc. up a steep hill.  How cool is that?

Now, there are some other advantage to electric.  We’re talking about insane acceleration like we see in some Teslas.  Plus, all wheel drive will most likely be standard.

It’s great to see mainstream Ford investing in electric technologies for the #1 vehicle sold in America, the F-150.  That means Ford is betting on electric going mainstream.  Unlike a Tesla, which is a luxury car brand full of production problems, Ford knows how to produce mass amounts of vehicles efficiently and affordably.  Ford’s investment in this arena likely means there will be luxury electric variants of the F-150 priced on the high end.  As Ford produces and sells huge quantities of these, it helps to bring the production costs down, thus making it affordable for every day shoppers.

Electric vehicles still have many problems.  The range is a problem.  How will Ford work out the range problems of an all electric F-150?  The F-150 is not a sleek Tesla.  It’s a BRICK that pushes a huge wall of air.  Oh, and it’s heavy.  Oh, and it may be carrying a ton of stuff in the bed.  And also towing a heavy, non-aerodynamic trailer.  What’s the range on an electric truck with this much load?

Also, charging isn’t fast.  It’s not like pulling up to a gas station and filling up in 5 minutes.  Charging can take many minutes to hours, depending on where you charge and how much you need to charge.  Super chargers are faster than many home chargers.

Nevertheless, despite these issues, it appears electric is here to stay.

What do you think?  Would you be interested in an all electric truck?