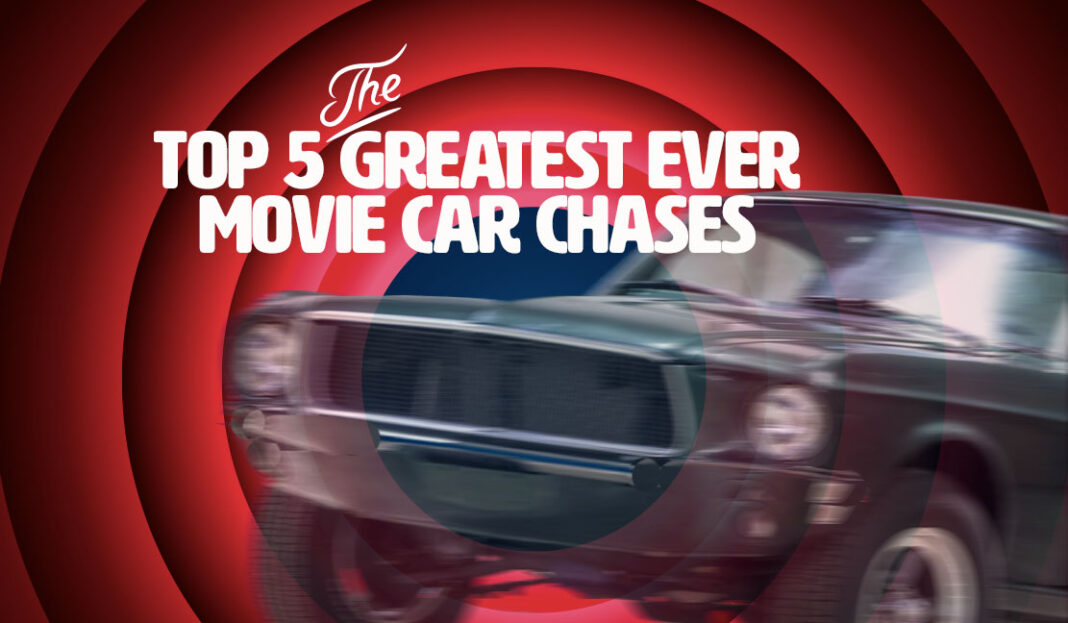 Nothing like a great car chase to grab the audience by the throat (and blow your budget!) But a well-shot chase scene can become iconic — and make its movie part of cinematic history. We’ve seen exhilarating chase scenes that evoke visceral reactions, keeping us glued to the screen. These directors caught lightning in a bottle with these beautifully composed, visually stunning chase sequences, thrilling audiences the world over and making their films a whole lot more memorable in the process. Here’s our top 5. Th GOAT!

The best car chase of the Bourne franchise, as Matt Damon’s Jason Bourne gets Marie in tow and drives a Mini Cooper through the dreary Paris streets in an attempt to evade the authorities. Using his cunning as a wheelman, Bourne hurtles down stairways, taking advantage of the Cooper’s small size to run rings around his pursuers, mounting the curb and barely avoiding pedestrians as he does so. Then a motorcycle cop isn’t looking where he’s going and hits a car, catapulting himself into the stratosphere. That the scene is backed by Paul Oakenfold’s excellent tune Ready Steady Go. This scene is proof that you don’t need shaky cam to make a gritty and engaging car chase.

Again, ignore the naff 1997 remake and stick with the 1971 original, which might not be as technologically advanced, but it has a wealth more charm and personality, as well as a sure iconic appeal. If the film’s narrative was strange and uncertain – for one thing, it was surprisingly philosophical – it does feature some of the best stunt-driving in the history of cinema, and director Richard Sarafian was smart to allow stunt-driving legend Carey Loftin to actually design the vast majority of the film’s chase sequences. Watching the white 1970 Dodge Challenger R/T tearing through traffic is a timeless, one-of-a-kind experience, and unlike many car-related films of the period, no speeding-up of the film took place to accentuated the speed; Loftin, crazy as he was, knew how to stage immaculate driving sequences, hence why he was still Hollywood’s go-to-wheelman right into his 70s. The narrative might not be up to much, but there’s no denying the visceral, white-knuckle power of the driving scenes.

William Friedkin pops up again with one of the best crime thrillers in film history, such that it ended up winning five Academy Awards, including Best Director and Best Picture, and also helped propel Gene Hackman to worldwide fame as the beleaguered Detective Jimmy “Popeye” Doyle. Though the story of cops trying to take down heroin smugglers was plenty engaging enough for Hackman to scoop up that Best Actor Oscar, we like to think it’s the genius chase sequence, in which Doyle gets into a 1971 Pontiac Le Mans to chase down an enemy, who just happens to be in a train above the streets of New York City that clinches it. It’s among the most unconventional and iconic chase sequences ever filmed – again, featured in the video game Driver – given that it’s not even between two cars, and as visceral as the scene is, it also enhances Doyle’s character development, cementing how thoroughly obsessive and dangerously determined he is. A chase that is at once incredibly nuanced and breakneck, Friedkin proves why he’s an A-list filmmaker of the highest order.

This film was directed by William Friedkin, widely considered one of the best directors of car chases in movie history. Obsessed with catching an evasive target, Petersen’s character takes more and more risks as the film progresses, culminating in this daring, bravura sequence, which has Petersen pushing his car to the limit, scraping in and out of countless tight spots in pursuit of his target, ending with the most brilliant feat of all; Petersen drives his Chevrolet the wrong way along the motorway during heavy traffic, making the scene not only intensely thrilling, but genuinely scary too. Nowadays all those cars would probably be rendered with CGI, but back in the good ‘ol days, Friedkin actually filmed it for real, and that is to commended.

Bullitt is the undisputed grandaddy of car chase films. Bullitt established Steve McQueen as a bona fide bad ass — and did the same for McQueen’s Mustang GT 390. Shot with no CG, it remains the measuring stick for car chases almost 50 years on, an outstanding, exhausting sequence that made iconic use of various San Francisco locations. For its time, a groundbreaking sequence. And today, it’s a helluva lot of fun to watch!
Though the heavy lifting in Steve McQueen’s Mustang GT 390 was performed by trusty legend Carey Loftin, the fact that McQueen looks so comfortable and badass behind the wheel enhances our engagement with what is going on, and also makes it more convincing that he actually did perform these incredibly stunts. Director Peter Yates manages to keep the chase more grounded and realistic than many of the chases on this list, so it’s a testament to his ingenuity as a filmmaker that it’s still one of the most thrilling on the list. Hubcaps fly off, rubber is burnt, and there are countless near misses, both with regard to traffic and then, later on, some shotgun blasts as well. That it ends in the most literally explosive fashion possible, then, is just the icing on the cake.