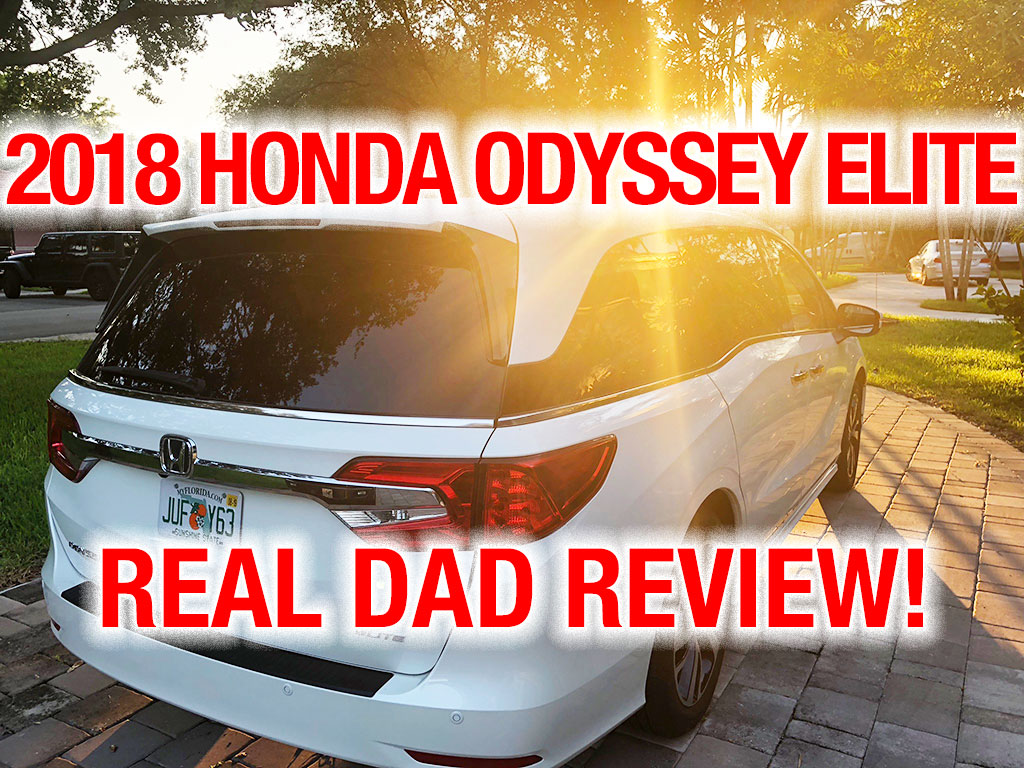 The 2018 Honda Odyssey Elite is an amazing vehicle that is perfect for big families.  This minivan gets top marks for great practicality and versatility. 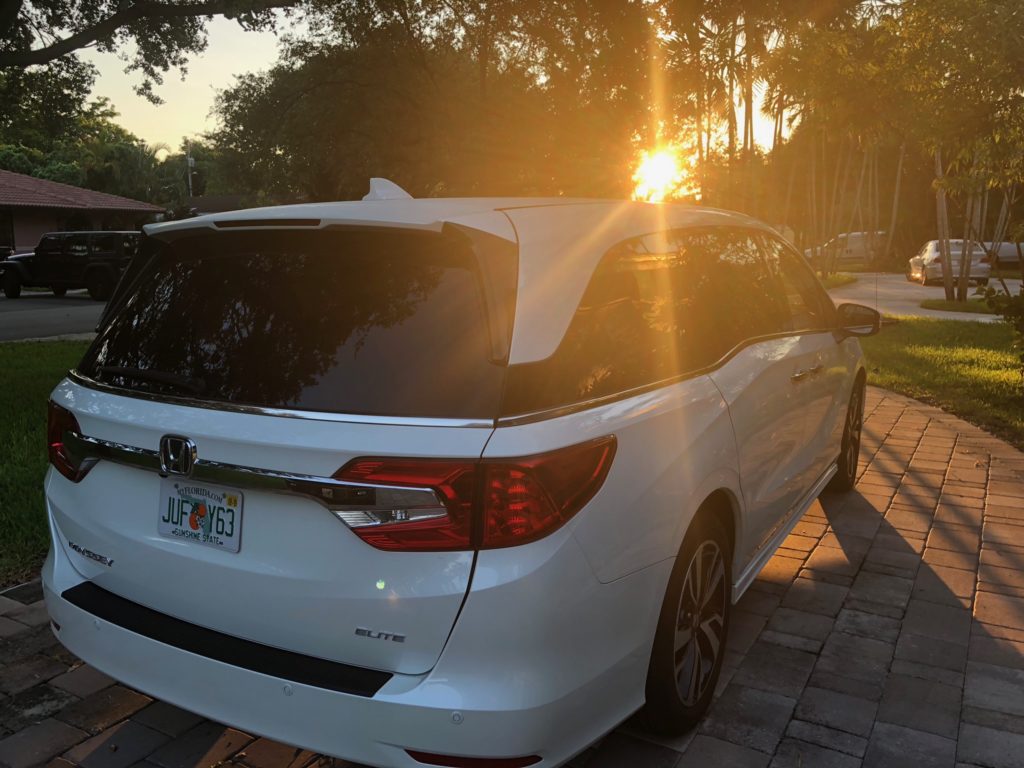 Let’s start off by saying the Honda Odyssey platform is absolutely fantastic.  Look, I keep leasing them because we’ve had a great experience with these cars.  There is no other vehicle that is as versatile, as roomy, as practical and as efficient as a minivan.  The only vehicles that can take as many passengers as this (8 passengers total) as comfortable as this is either another minivan or a Ford Expedition or Chevy Suburban.  (We didn’t like the Suburban’s poor 3rd row leg room due to a lack of independent suspension.)  The Ford Expedition is probably our favorite vehicle, but it comes at a higher premium than this minivan upfront, plus, an Expedition is more expensive to maintain with far lower fuel economy than the minivan.  However, we were very tempted to pay more for the Expedition due to its factory towing capabilities.

We really did like the new Expedition and were tempted to pay about $2,000 more down and close to $200 more per month for a fully equipped version, but decided to hold save that cash and get another Odyssey.

Okay, enough about the Expedition.  Let’s get back to the Odyssey.  Here are some of the things we LOVE.

Even with the 3rd row up, there’s plenty of room in the storage compartment for typical groceries and luggage.  On long trips, we’ll put one seat down and use the space for the cooler, while keeping the 3rd row seating for our daughter.  The two boys usually sit in the second row to watch a movie while our daughter uses her phone.

Even when we take our mother in law with us, there’s plenty of room.  She’s partially handicapped and requires assistance getting in and out of a wheelchair.  Her wheelchair fits perfectly behind the 3rd row.  My mother in law will sit in the second row, which has plenty of door access for two people to help her get in and out of the car.  And there’s still space for the 2 boys to sit next to grandma while my daughter keeps the 3rd row to herself.  Extremely convenient and practical.

And you know that kids have friends.  Well, when you have a minivan, you’re automatically the bus driver.  Each of my 3 kids can bring an extra friend along and still have space for my wife and I in the front seat.

If you’re a soccer mom or dad, a church family, or just a big family, you’ll love the versatility and roominess the Honda Odyssey provides. 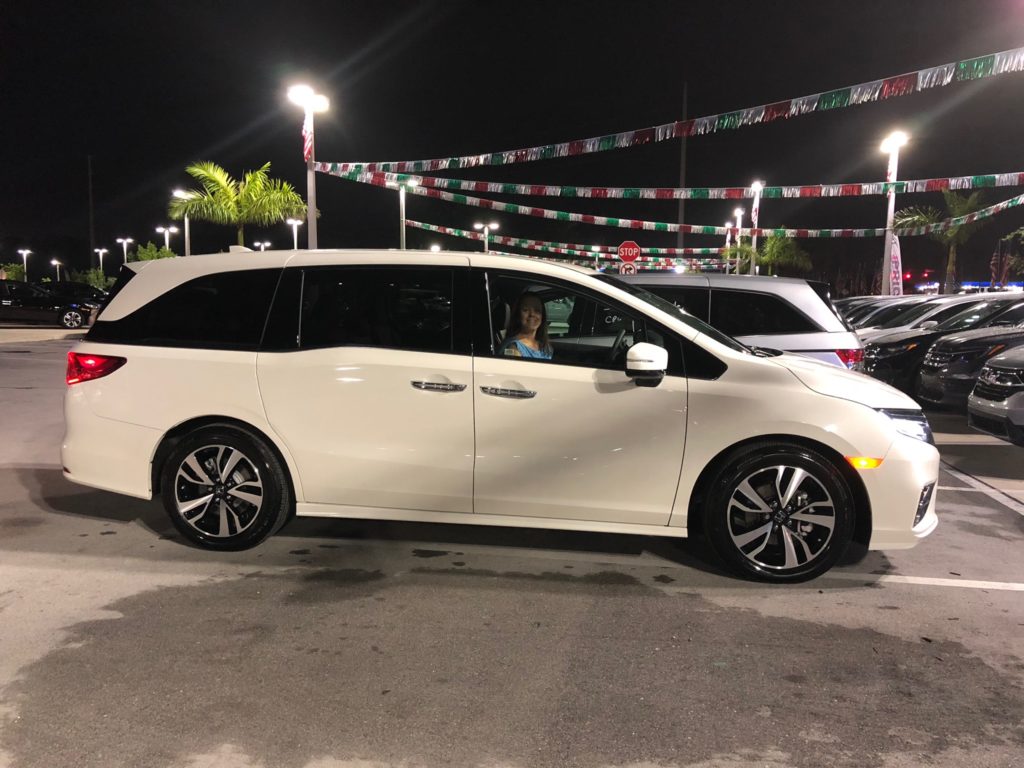 I’ve long grown out of my lead foot stage where I used to punish cars incessantly.  Most minivan drivers are parents who are not hot dogging little Johnny on the way to school.   This is not a sports car.  But it does have plenty of power and performance.  If I need to accelerate quickly to get on the highway or merge into traffic, there’s always more than enough power to get the job done.  Taking the kids to Disney on the 70mph Florida Turnpike, you’ll find most of the traffic is doing 85 to 90mph.  The car feels like it’s doing 50mph when you’re at 90mph.  It’s smooth stable and provides plenty of confidence.  Now, we would never recommend you speed, but this car will easily hit triple digits with confidence.

As for reliability, it’s a Honda.  That’s what they’re known for.  All I ever do is change the oil and tires.  Turn it in and exchange for a new one every three years.  It’s worry free driving.  I did have to exchange the battery once on the 2015 model, but that’s it.

ENTERTAINMENT SYSTEM
The entertainment system is great.  Now, this review is on the Elite edition which has every bell and whistle you can have on the car.  The sound system rocks.  The blu-ray player (which helps since we have many blu-ray discs we couldn’t play on the old dvd player) is extremely practical.  The younger boys love to watch a movie, especially on the long trips.  Heck, I love listening to many of the movies as I drive.

APPLE CAR PLAY
Apple Car Play should be on every single car.  Period.  The GPS on my iPhone is superior to any in car GPS system.  And Siri’s voice activation is also better than all the car voice activation features.  We’ve gotten to the point that we no longer use the in car GPS systems either in my wife’s car or in my F-150, because the phone’s ability to find what you’re looking for is light year’s better than what the in car GPS interface can do.  Connecting it with Apple Car Play makes it far better than just navigating off your phone, which is what I do in my F-150.  Kudos to Honda for adding this feature in the 2018 models.  It was not available on our 2015 Odyssey.

COOLED SEATS
New for 2018 are cooled seats.  Yes, Honda has had heated seats for years.  And that’s used in Miami about 3 times per year.  However, the cooled seats were a definite plus to have here in South Florida where you can literally burn your hamstrings on hot days if you’re wearing shorts or a short skirt.  Great job and Kudos to Honda for adding the cooled seats for 2018. 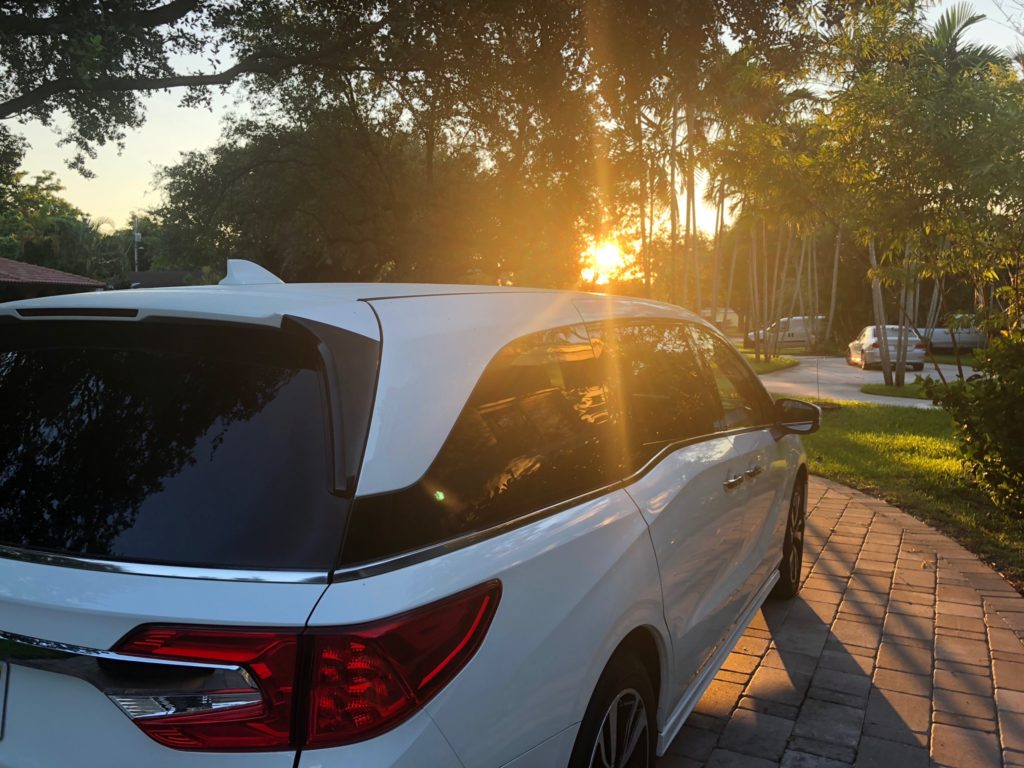 4 – Cool Features we Never Use

Sideway moving seats
To move the seats sideways means you have to take the center seat out and turn the Odyssey into a 7 passenger car instead of 8.  Well, while we normally just have 5 passengers in the car, we often do carry 8, so it’s impractical for us to remove that center seat making the sliding seat feature rather useless.  On the same note, we saw some online reviews about guys hurting their backs to remove the second row of seats.  Who the heck ever removes that 2nd row?  Okay, I’m jaded because for large capacity items we use the F-150.  So we don’t use the minivan for sheets of plywood from Home Depot.  We use it as a people hauler.  Anyhow, the sideway moving seats Honda promotes might be cool, but we never use it.

Car Talk and Cabin TV Monitor
At the dealer, we thought these were incredibly cool features.  We played with it.  We thought it was super cool.  And guess what.  We never use it.  It’s cool.  But quickly forgettable in real life.

IN-CAR VAC
Having a vacuum inside the car is cool.  We had it in our 2015 Odyssey Elite and have it again in our 2018 model.  We used it a few times in the 2015 model.  After about 4 or 5 uses, it quickly gets clogged.  It never really had strong sucking performance.  We find that using our regular power vac is more practical, more powerful, and makes vacuuming faster.  Nevertheless, it’s cool to have when you’ve got a mess that needs to be picked up fast.  But truth be told, a larger shop vac does a much better job.  It’s a neat feature, but I really don’t need it.

AUTO STOP/START FEATURE
The Auto Stop/Start feature is new for 2018 and it sucks.  Let me put it bluntly, I absolutely positively without a doubt think this is the worse, most annoying, most hated feature of this car.  Damn you Honda.  You have a nearly perfect car.  Why must you ruin it with this totally unwanted disaster.

Okay, what is the Start / Stop function?  it’s a feature that automatically shuts off the car to save when you come to a stop to save fuel.  It probably helps Honda meet some EPA fuel requirement to pass a test with a MPG rating that’s higher than what real drivers will ever get.  That in of itself, is not bad.  Just let me turn the feature OFF if I, the owner, the driver, don’t want this feature.

Here’s why it’s annoying.  You can’t permanently disable it. You can turn the feature off AFTER you turn on the car EVERY SINGLE DAMN TIME you turn on the car.  Can you say annoying?  Of course, if you forget to turn the button off, the car will turn off, pissing me off everytime it happens.

Here’s why auto stop/star is bad:

I’m so happy my 2015 Ford F-150 does not have the auto stop/start feature and I will not get another car with this feature again unless I can permanently disable the feature.  It’s that annoying.

NOTE:  This is a personal preference and plenty of people don’t give it a second thought.  But seeing as I can’t turn it off, it’s an incessantly annoying feature that I absolutely cannot stand about the car.

HORN SUCKS
As I stated earlier, I’m on Honda Odyssey number 4.  They changed the horn on the 2018 models and it sucks.  The Odyssey used to have a very manly American type horn.  They didn’t switch the horn to the 80s era Japanese friendly horns.  Now it sounds like a manly horn that it’s balls cut off.  It’s wimpy.  A horn is meant to scream, “Hey, you watch out!  Your’re about to cause an accident.” in a very confident many voice / horn.  The new horn sounds like sheepish guy saying, “Please don’t hit my new minivan.”  Dear Honda, please go back to the horn you had before.

BIGGER SUNROOF
Honda has had reliable, tight seal sun roofs for decades.  In fact, I think the sunroof on the Odyssey is about the same design as the sunroof my mom had back in her 1981 Honda Prelude.

Maybe I’m a little spoiled.  My 2015 F-150 has a HUGE double pane glass sunroof that gives rear passengers an amazing view of the sky.

The Odyssey has a HUGE roof.  Maybe you can put two sunroofs, or a double or triple pane glass roof?  I think a bigger sunroof is cooler than the cabin talk and car vac features.

FACTORY TOW PACKAGE
We were so close to getting a Ford Expedition simply because the Expedition can tow.  Now, I have no expectation that an Odyssey will have the same towing capacity as my F-150 or an Expedition, but I do have a small 19′ boat that is within the tow rating of the vehicle.  It would be awesome if Honda had a factory based tow package.  A practical feature lots of dads would love. 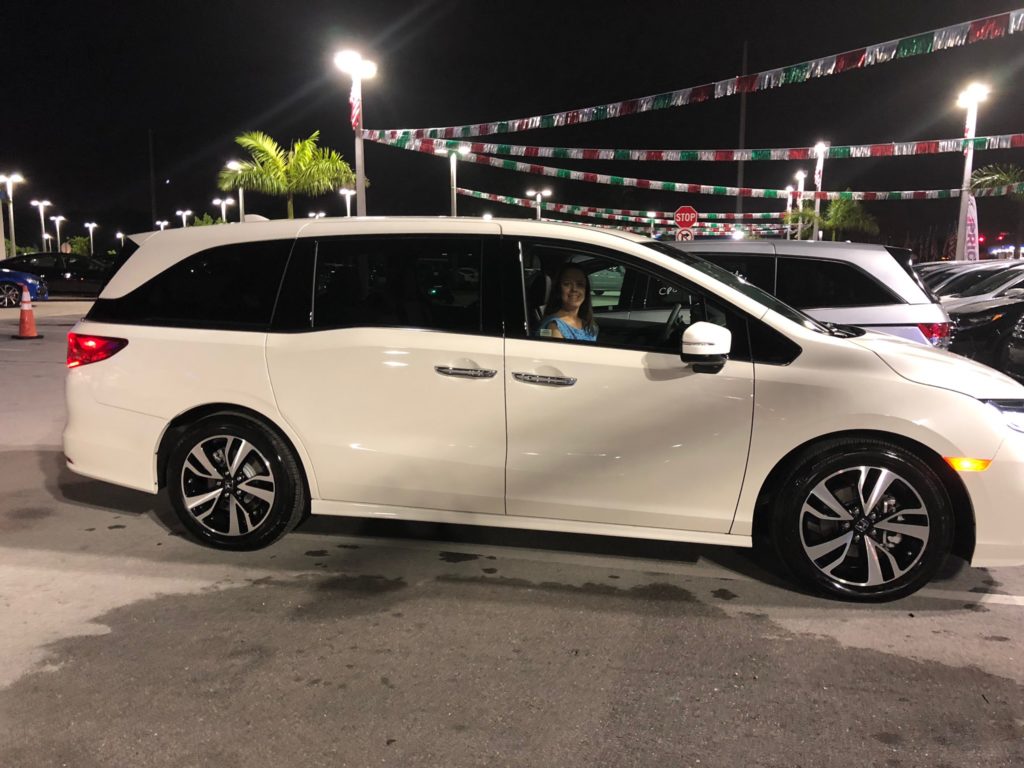 As a 4 time lessee of the Honda Odyssey, we obviously love the practicality, versatility, performance and reliability of the vehicle.  A minivan is an incredibly smart choice for families with 2 or more kids.  You always have plenty of room for your kids, their stuff, and their friends.  You’ll never go wrong with a Honda.  And if Honda can address our little pet peaves, they’ll have completely mastered the perfect people hauler.

We use our hard earned cash to lease a Honda and we would not hesitate to recommend you do the same.

As always, we love to get your feedback.  Is this review helpful?  Do you have an Odyssey?  What do you think about our pet peeves?  Let us know in the comments.