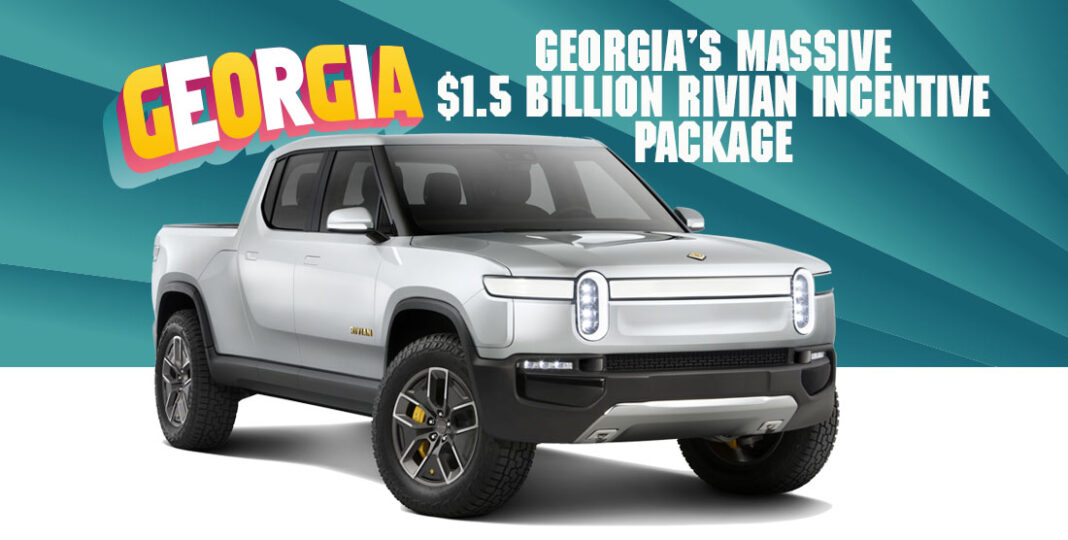 It is the largest incentive deal in Georgia’s history.

Looks like Georgia really wanted that new Rivian Automotive facility — the Georgia Department of Economic Development ponied up $1.5 billion in state and local incentives to close the deal with Rivian to build a massive plant near Atlanta. The move will bring jobs to the Rutledge, GA area and enhance Rivian’s production capability.

It’s the largest such investment Georgia history == and includes tax credits, abatements and subsidies like site preparation and job training support from the state

But…there has been local resistance to the project.

Rutledge residents living near the site (about 45 minutes east of Atlanta) have railed against the project, amid concerns about traffic, environmental damage and continued urban sprawl. A Facebook group dedicated to fighting the project amassed about 3,000 members, and drew political support from former U.S. Senator David Perdue, who is challenging incumbent Governor Brian Kemp in Georgia’s Republican gubernatorial primary in May. Ultimately, the state took over the approval process to consolidate local zoning and compliance and head off a threat of project delays.

Rivian is flush with cash

The Irvine, California-based company is well-funded, and has become the bell cow for a growing pack of EV manufacturers. The company’s November initial public offering was the sixth largest in U.S. history, generating more than $13 billion. However, Rivian has struggled with supply-chain issues at its existing plant in Normal, Illinois.

Rivian called the deal a “milestone” in its progress toward building a second plant. “The long-term economic partnership promises to deliver value to Rivian, the people of Georgia and their kids’ kids’ kids,” the automaker said in a public statement.

What’s in the deal?

Rivian will get $476 million in statutory tax credits if it fulfills its promise to create a total of 7,500 jobs by the end of 2028. If it doesn’t, there are clawbacks to protect the taxpayer, said Pat Wilson, Georgia’s commissioner of economic development. Georgia is putting in another $288 million in discretionary spending in the form of site preparation and job training programs. Tax abatements from the four counties hosting the plant make up the rest of the package — about $700 million over 25 years.

The counties will still reap about $330 million in tax revenue from Rivian, versus the $2 million they would get if the project didn’t happen, Wilson said. “It’s a huge net win,” he said. “The state has always placed a priority on jobs — if you’re creating jobs in the state, we incentivize those jobs.”

Rivian’s investment would be the biggest economic development project in Georgia since at least World War II. The Peach State has been passed over by multiple Asian and Europe automakers, and has only one vehicle assembly factory, a Kia Motors plant in West Point, near the Alabama border. South Korean battery maker SK Innovation has constructed a $2.6 billion factory in east Georgia to make power sources for electric vehicles, including Ford’s F-150 Lightning pickup.

Rivian has pledged to create more than 7,500 jobs, with the eventual goal of producing 450,000 vehicles annually at the site. Rivian will pay workers an average annual wage of $56,000, and the project will create nearly 8,000 indirect jobs, according to the state.

The company also has an order for 100,000 electric delivery vans from Amazon.com, a major Rivian shareholder.