Home Car Review THE MUSTANG MACH E: MUSCULAR PERFORMANCE, BUT IS IT A MUSTANG? 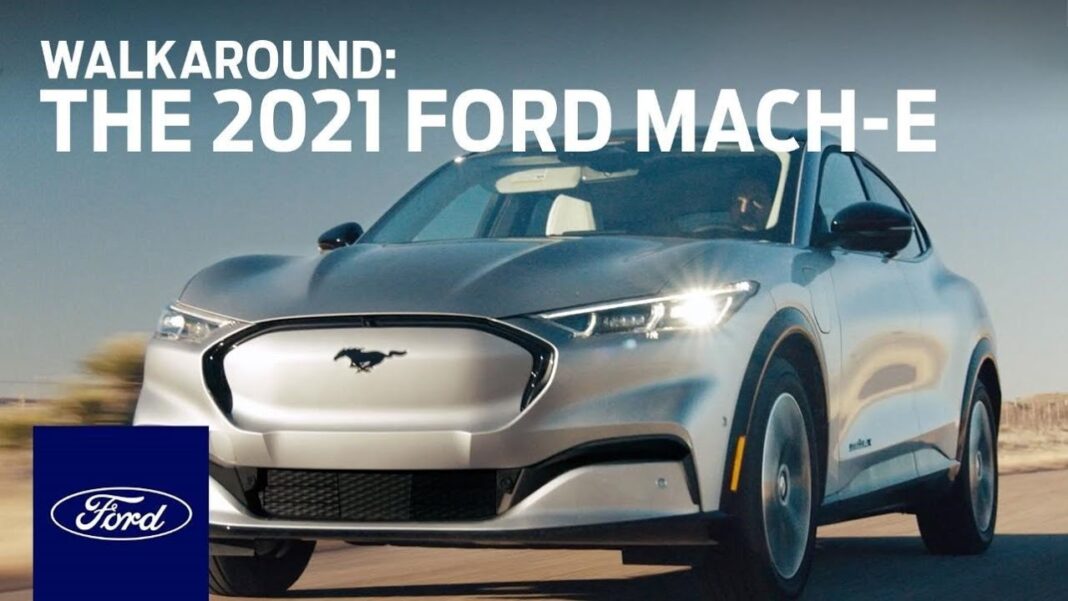 The short answer for most purists is a resounding ‘no!” But despite the drastic design departure, this 100% electric “crossover” Mustang is loaded with power and advanced technology. 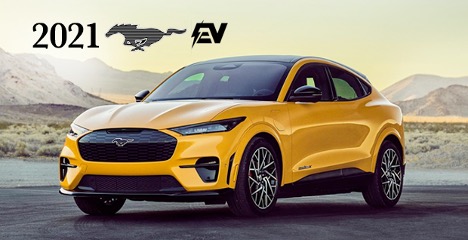 The Ford Mustang Mach-E is a five-door electric compact crossover SUV produced by Ford. The vehicle was introduced on November 17, 2019, and went on sale in December 2020 as a 2021 model. The car won the 2021 North American SUV of the Year Award.

On March 9, 1964, the first-ever Mustang, with a powerful 250 cui V8 engine, rolled off the assembly line in Dearborn, Michigan. One month later on April 17th, 1964, the Ford Mustang made its world debut at the World’s Fair in Flushing Meadows, New York.

Yes. The answer is no. It’s not a Mustang — or rather — it doesn’t look like a Mustang. For Mustang lovers who shout disdain for this new style, a style (more or less) honored since 1964, the departure is just too much. But while it’s not your father’s Pony Car, it is by no means a swan song for the mighty Mustang. This is one amazing automobile.

With due respect to those who have a legacy connection to the car,the New MACH E may just be the perfect “next generation” for the Mustang electrinic brand. So, is it a Mustang…or something else? Wherever you land on this issue, the fact is that Ford has made a leap into the future with its eye on a new kind of Mustang buyer.

The car that changed the auto industry…
The Ford Mustang is one of Detroit’s greatest chapters. Born In theearly 1960s and led by the legendary Lee Iacocca, Ford envisioned a sporty youth-market car based on the popular compact Falcon.

The Mustang was developed in record time on a very modest budget. And while it went on to break sales records, the initial launch was luke warm. Ford planned for 100,000 first-year sales, but dealers sold 22,000 on the first day. Since then, through a variety of styles and designs, the Ford Mustang remains a top name in American Muscle. So here’s to the Mustang, And a hearty welcome to the re-imagined MACH E, a milestone in automotive history, and a close (very close) second to Tesla in overall industry rankings. A true Mustang? Maybe not. A Muscle car? You bet.

The base-model standard range rear-drive Mach-E accelerates from 0-60 mph in 6.0 seconds and according to the EPA, it’s rated for 230 miles on a charge. Opting for all-wheel drive should drop 0-60 acceleration to the mid-fives, but range falls to 211 miles. These models have 75.7 kWh battery packs that accept up to 115 kW on a DC fast charger. Power output should be around 255 hp and 306 lb-ft of torque. Ford says extended-range Premium models will accelerate similarly to their standard range counterparts, but increase driving potential to 300 miles for rear-drive and 270 miles for all-wheel drive variants. Extended range Mach-Es have a 98.8 kWh battery receiving up to 150 kW on a DC fast charger. When we tested a dual-motor AWD Mach-E 4x putting out 346 hp and 428 lb-ft of torque, it reached 60 mph in 4.8 seconds. The top-end GT models prioritize performance. The GT makes 480 hp and 600 lb-ft of torque, good for a Ford-estimated 0-60 time of 3.8 seconds. Range is EPA-rated at 270 miles. The GT Performance Edition packs the same hp but 634 lb-ft of torque, enough to propel the EV from 0-60 mph in 3.5 seconds, according to Ford. This model is rated by the EPA to travel 260 miles on a charge.

Landmarks in the legacy of the Ford Mustang.

As the automaker reimagines its famous pony car.

The 1967 Mustang body was redesigned and different from the previous 2 years. The car got longer, and heavier and wider. Ford utilized a dual hydraulic system. The optional front disc brakes were also available with power assist. 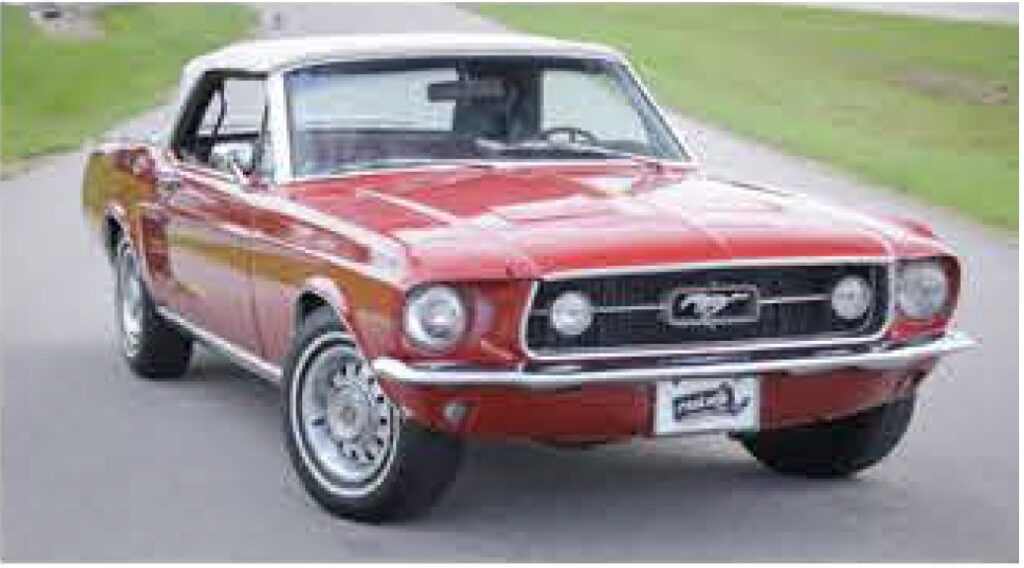 The spectacular 1969 BOSS 302 burst onto the scene with its Sportsroof Fastback body style and ditinctive graphics. 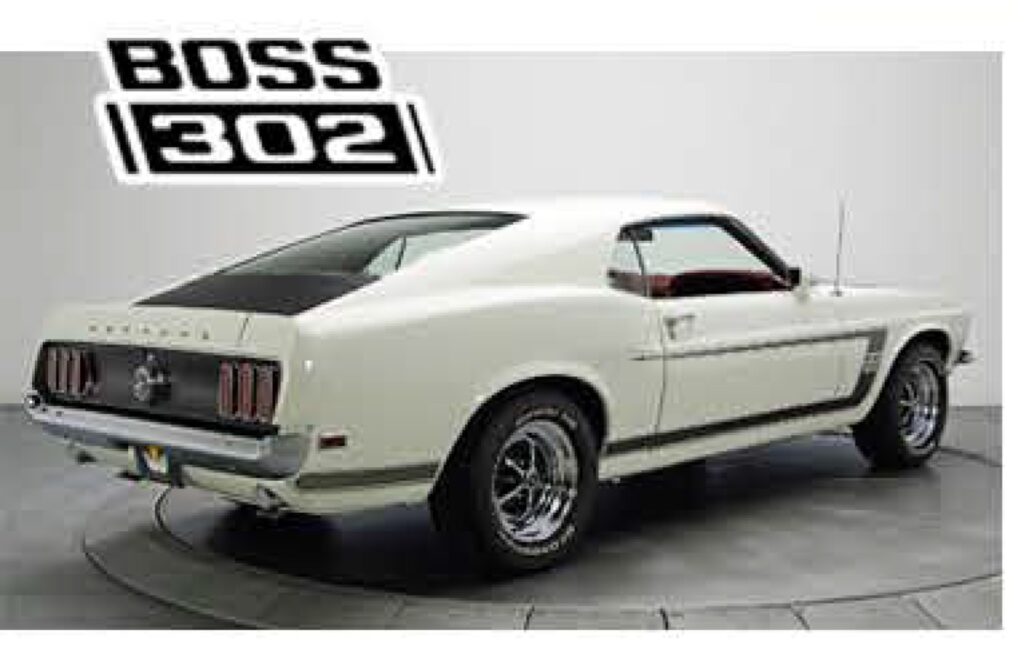 Ford flexes its muscle with one of the era’s finest performance cars. The Mach 1 ended the reign of the GT badge (until Ford brought it back in 1982). Spellbinding fastback looks with brusing V8 power – the two-valve 351 Windsor. 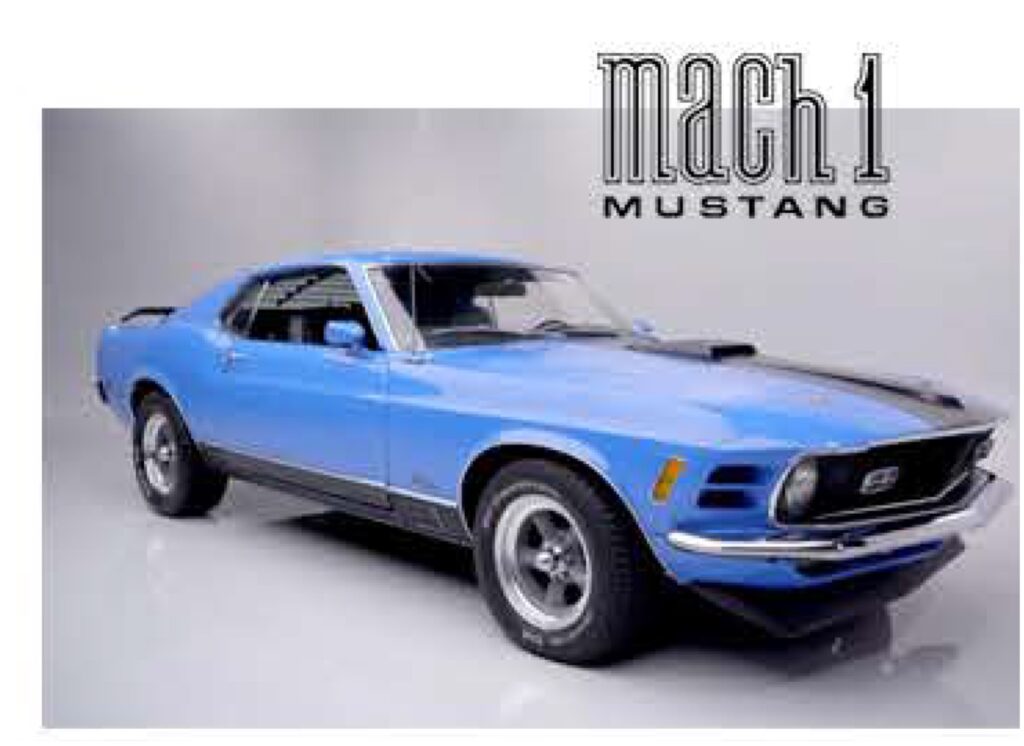 In reaction to tightening emission regulations and rising fuel prices, Ford cancels the BOSS 351 and 429 big block models after 1971. The 351 cui version was the only version left in production. 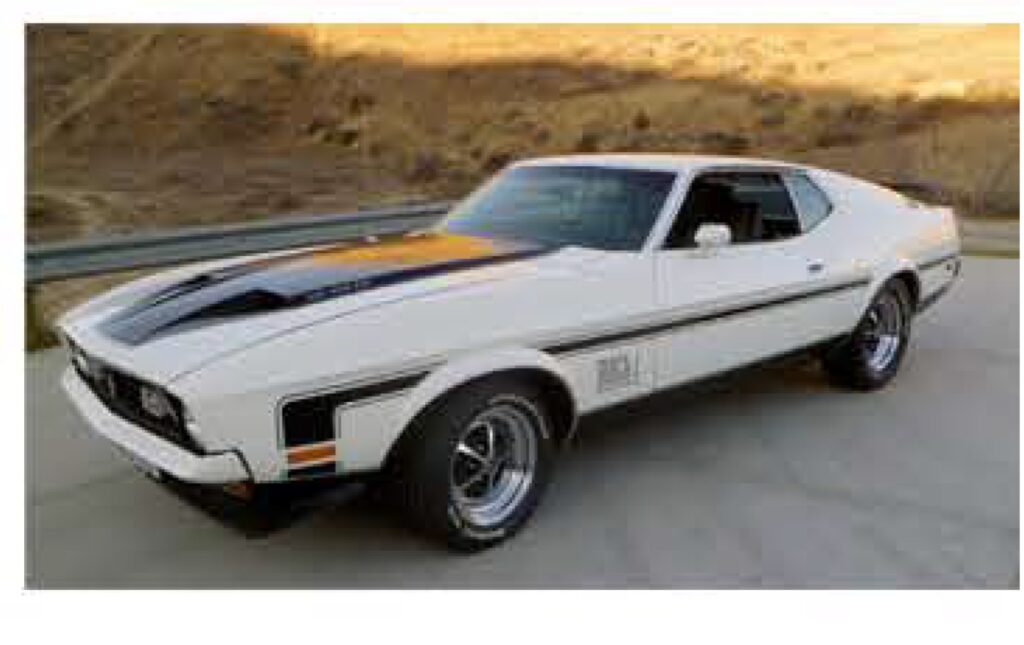 The advent of the Mustang II generation of Mustang design. These cars were smaller and less powerful engines than their ancestors as the fuel crisis continued to influence Detroit. Despite the fact that Mustang IIs were slower and more expensive, the Mustang II was named Car of The Year by Motor Trend in 1974. 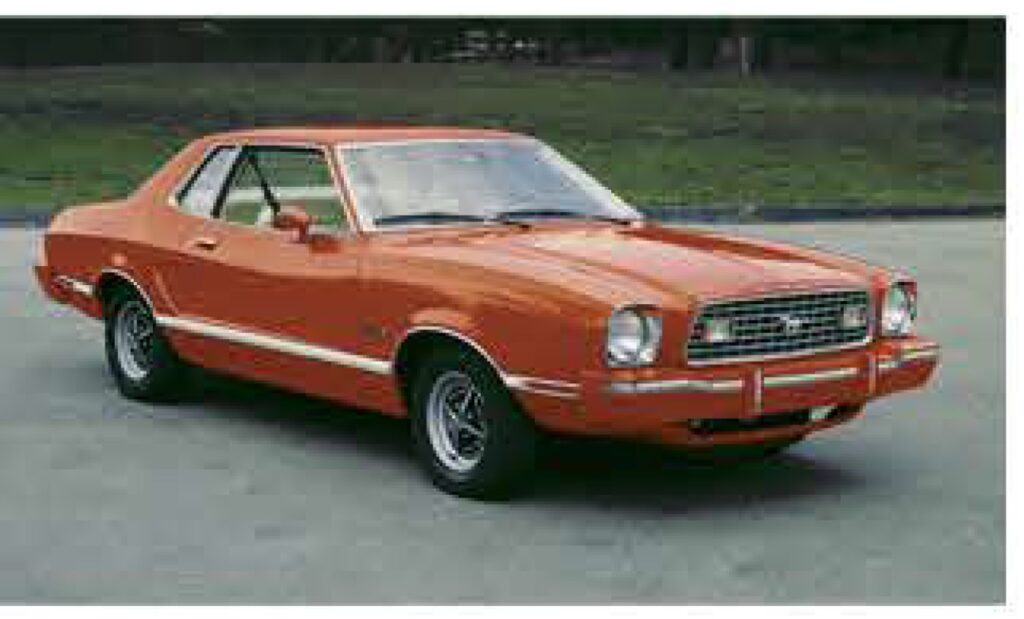 Ford returns the Mustang to its roots with its snarling 4.6 L, all-aluminum V8 in the 2005 GT. Featuring three-valve heads and packed with 300 HP (an increase of 40 HP over the 2004 engine, with less weight). Mustang lovers cheered the “return to your roots” body styling. The muscle-bound Mustang is back. 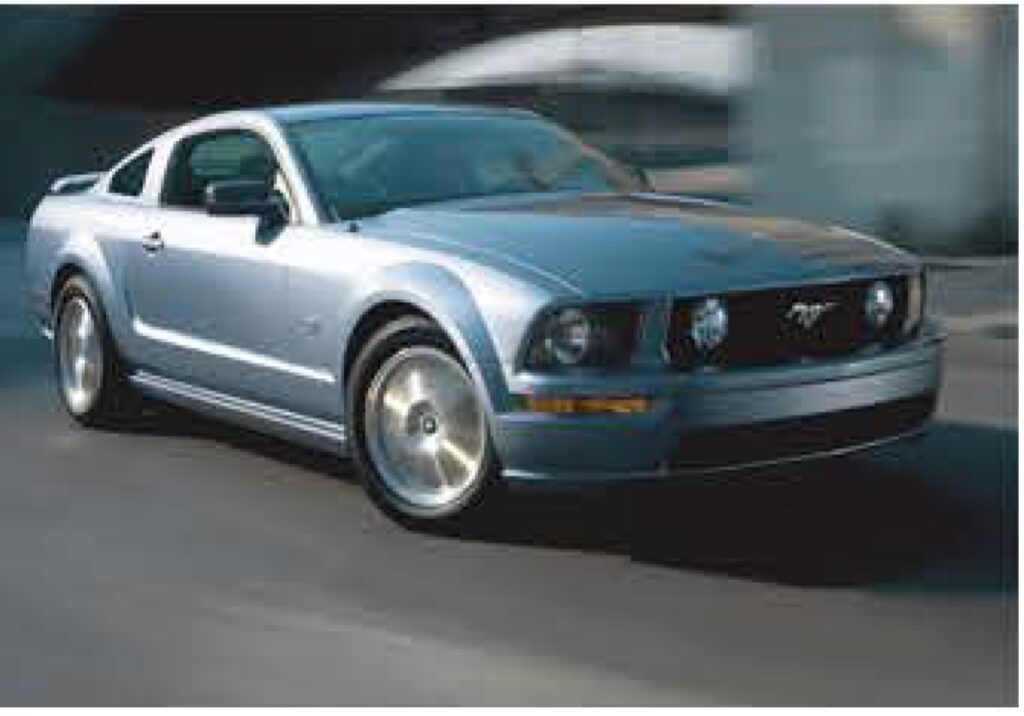 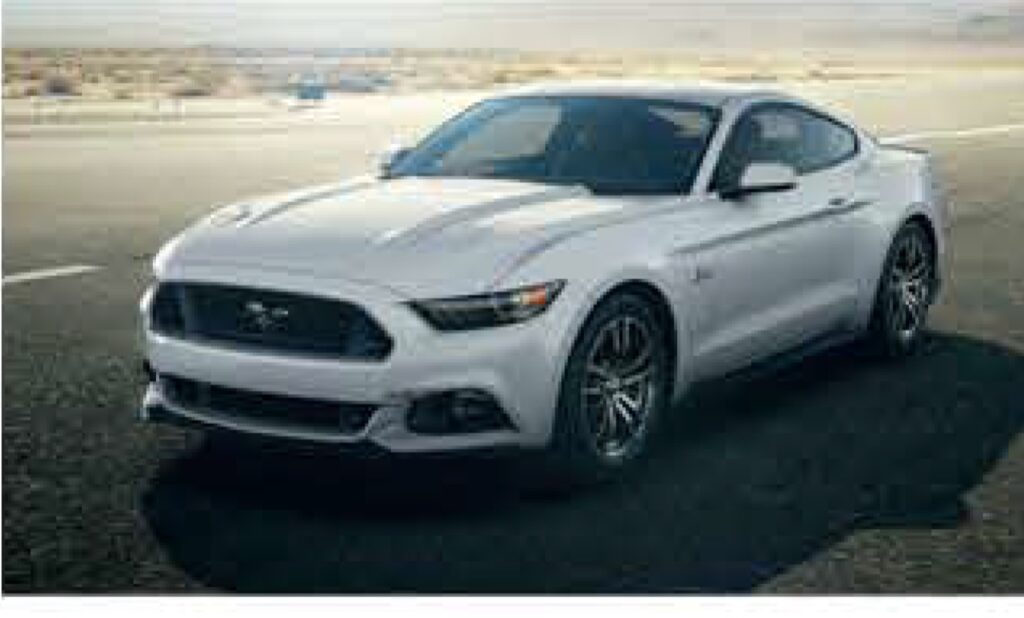 And the future arrives with the MACH E. A controversial new design – but no controversy regarding the enormous power and space-age technology of this amazing ew 100% electric masterstoke from Ford.