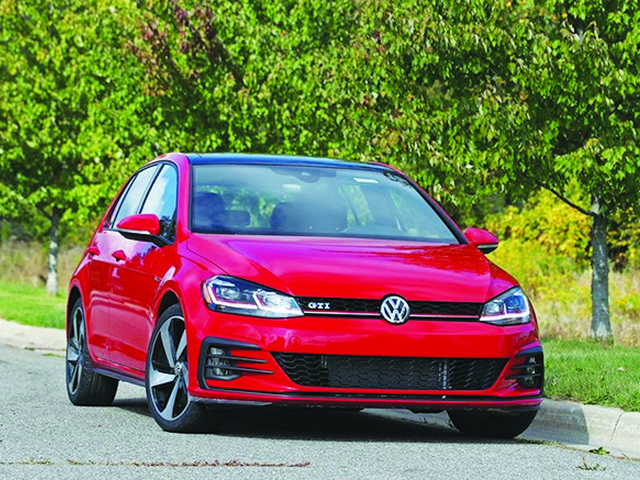 The Volkswagen GTI made its debut in American in 1983. Back then, the GTI, based on the first-generation Golf, was a performance-buffed version of that painfully slow economy car.

Almost four decades later, much has changed, but the 2019 Golf GTI still delivers European flair at a reasonable price. It may not be as affordable as it used to be, but it still is a bargain compared to other premium brands.

For 2019, Volkswagen adds eight more horsepower for a total of 228, along with some performance hardware upgrades.

But before we jump behind the wheel, check out who typically buys this compact sporty car. Turns out, the majority of Golf GTI owners are men, at 86 percent. Their median age is 46, and their median annual household income is $113,816.

Owners report that their favorite things about the Golf GTI are the engine/transmission, interior design, driving dynamics, exterior styling, and seats — and I agree.

Let us start with the exterior. The current Golf debuted back in 2015, but Volkswagen designed it with an upscale appearance — the smooth, simple, and sleek styling cues creating a mild but timeless look that remains fresh today.

The GTI adds subtle visual cues that designate it as the Golf’s fun cousin, such as the saucy red line spreading across the fascia and into the headlamps, badging throughout, and red GTI-logoed brake calipers peeping out from behind the wheel.

And I’ve got to say my test vehicle’s Tornado Red exterior got more than a few compliments from onlookers. It was hot!

Inside, the good looks continued, with my GTI’s tasteful Titan Black Leather with red stitching. It was distinctive and perfectly coordinated with the exterior

With regard to the infotainment system, Volkswagen reserves the latest in technology for GTI’s higher trim levels, like the Autobahn edition I tested. It featured a larger eight-inch display, satellite radio, navigation, or Car-Net Safety & Security services — along with the standard Apple CarPlay and Android Auto smartphone integration.

In the visibility & safety department, thanks in part to the car’s seats and slim windshield pillars, the GTI provides excellent forward visibility. The view to the sides and rear is terrific, too.

In common driving situations, the GTI feels planted to the road but nevertheless delivers a remarkably silken ride that absorbs most of the harshness from the road. Those seeking greater ride and handling refinement might consider the available adaptive damping suspension, standard on my Autobahn trim.

The MQB platform on which the GTI sits, along with the majority of the company’s modern vehicles, is a robust foundation upon which to base a car. In other words, as applied to the Golf GTI, the underlying structure is over engineered — and that lends the car a sense of quality and solidity that many comparably priced vehicles lack.

Grant Miller is the publisher of Miami’s Community Newspapers. He may be contacted by calling 305-662-2277 or via email at Grant@CommunityNewspapers.com.