Ford dealerships are in the unenviable position of offering the top selling Ford F-Series pickups. Add to that some of the legendary name plates including the Ford Mustang, Ford Bronco, Ford Explorer, and Miami’s Ford Dealers are guaranteed to get a ton of shoppers each week.

So when you’re shopping for a Ford dealership in Miami you’re going to have a few questions.

Which Miami Ford Dealership has the best prices?

What Miami Ford Dealership has the best service?

Which Miami Ford Dealership has the best selection?

Let’s start with identifying the seven (7) Miami Ford Dealerships.  To be clear, we’re talking about the Ford Dealerships in Miami-Dade County.   Here’s the list of the contenders in alphabetical order:

To rank the best Ford dealerships in Miami, we created a composite score that looked at the overall Yelp Score, the Google Rating, the Miami Cars Rating, and the score from Dealer Rater.  Combined, we were able to create a composite score using the wisdom of the crowd.  So without further ado, here are the best Miami Ford Dealerships:

Autonation Ford Miami wins our overall composite score with a 13.8 composite score.  It tied for the second highest Yelp score.  It had a 4.3 rating on Google.  It scored a 4.0 on MiamiCars.com.  Plus it had a 4.5 rating on Dealer Rater.  It wasn’t necessarily the best on any of the individual dealer ratings, but it consistently ranked high on all of the ratings.  This gave us the confidence to score Autonation Ford Miami as Miami’s #1 Rated Ford Dealership.

AutoNation Ford Miami is located at the corner of NW 57th Avenue and the Palmetto Expressway (State Road 826).

Lorenzo Ford Miami came in a close second with an overall composite score of 13.7. Lorenzo Ford got top notches on Google and MiamiCars.com.  To be blunt, you really have to want to go south to get to experience Lorenzo Ford Miami’s quality service.  The dealership is located at 30725 South Federal Highway (US-1) in Homestead.  However, they know they have to treat customers better than other dealerships in order to lure you in.  Plus, in my experience, this dealership will haggle and work with you to get an outstanding deal on your vehicle.

Our recommendation:  Give Lorenzo Ford Miami a telephone call and/or email them when shopping for a new Ford.  If you find the vehicle you want, chances are they’ll make the drive south worth your time and effort with great service and a great deal.

NOTE:  Due to the commercial nature of Palmetto Ford Truck Sales, they have limited hours on weekdays and Saturdays.  They are closed on Sundays.

It’s no secret that Metro Ford is not located in the best neighborhood in Miami, located at 9000 NW 7th Avenue, just off I-95.  So they need to bring in customers with great deals and keep them with exceptional service.   Metro Ford came in 4th place with a 13.6 composite score.  In fact, they tied for 1st place on the Google Ratings with a 4.5.  They also led the way on the Dealer Rater score with a 4.9.  However, they were dinged with a low score on MiamiCars.com.

Nevertheless, this dealership has been operating in Miami for several decades and is centrally located.  And let’s be honest, if this dealership were located in Coral Gables, you have to pay more just to cover the real estate expenses.  A dealer located in a less glamorous neighborhood may have lower operating expenses translating into a better deal for you.  Don’t overlook Metro Ford when you’re shopping for your next Ford in Miami.

As the name implies, Midway Ford is located in the middle of Miami.  Literally on Flagler Street, just off the Palmetto.  Think one block west of the Mall of the Americas (formerly known as Midway Mall).

Midway Ford is a large Ford dealerships with lots of inventory.  I can attest to having successfully purchased a new Ford F-150 Lariat from this dealership at a very attractive price.  This dealer is known for haggling and getting you a great deal. 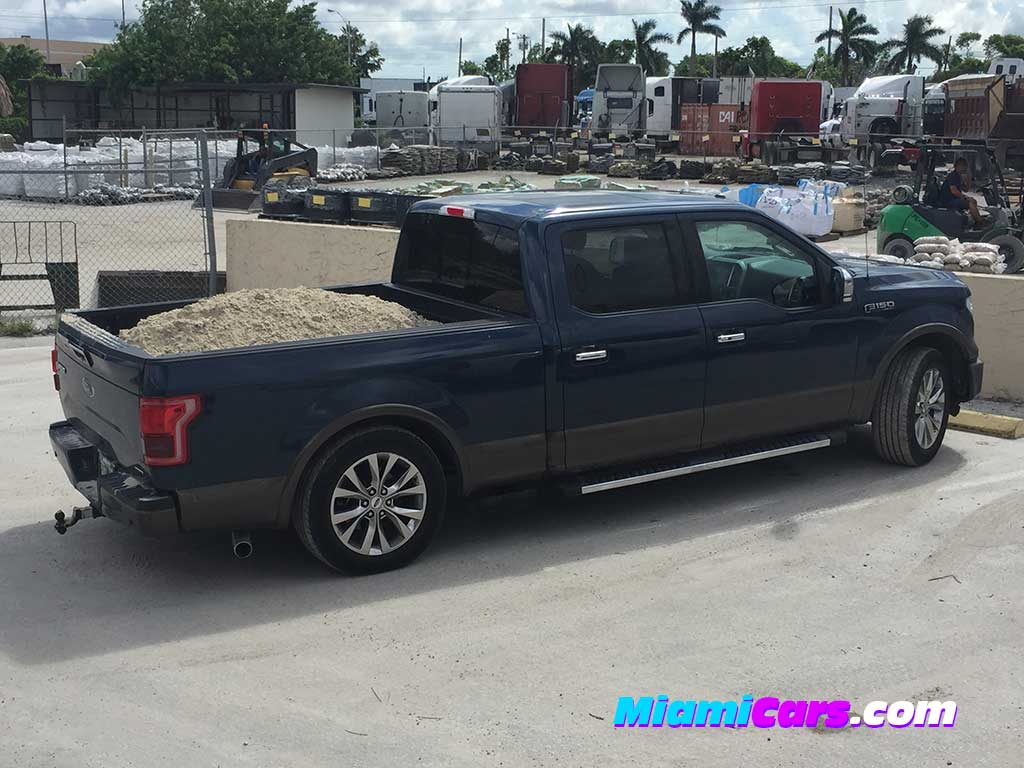 This is also one of the Ford Dealerships closest to my home.  So I’ve had the pleasure to having my truck serviced on a few occasions and the service guys have been top notch.

Bottom Line:  You can get a great deal at Midway Ford, but you may have to filter through some of the sales folks and get to the managers for the best experience.

Ford of Kendall scored a 10.5 on our composite score.  Now, that number is not very high, but it’s important we call out that Ford of Kendall is the newest of the Miami Ford Dealerships and had the fewest number of reviews.  In other words, time will tell how good Ford of Kendall will be.  They had their Grand Opening in October of 2019.  And then, COVID-19 hits in early 2020.  To be fair, they are now just getting into the normal groove.

Ford of Kendall is located in Palmetto Bay just south of The Falls.  It’s conveniently located for the folks living in the area of Perrine, Kendall, Cutler, Deering Estate, Pinecrest, and more.

Ford of Kendall had solid 4.0 ratings on Google and even a 5.0 rating on MiamiCars.com.  It was hurt by a low score on Yelp and insufficient number of reviews on Dealer Rater.  Nevertheless, if you’re shopping for a new Ford, I’d seriously consider shopping Ford of Kendall and giving them an opportunity to earn your business.

As a customer who has had his vehicle serviced at both Gus Machado Ford and Midway Ford, I’ve generally received a more professional experience at Midway Ford than at Gus Machado Ford.  While I’m confident both dealers did the mechanical work to the standards that Ford requires, you want to be treated like your car matters by the service personnel that work with the public.  I’ve had good experiences at both dealerships.  But Midway Ford employees have consistently acted more professional towards me than the service personnel at Gus Machado Ford.  (Okay, I have to share this.  One time there was a service “girl” / young lady at Gus Machado Ford who was far more interested in who wanted cafecito and flirting than actually paying attention to customers waiting for someone to attend to them.  To be fair to Gus Machado Ford, I don’t think she lasted very long as I never saw her there again.)

Here’s the point.  Gus Machado Ford has accepted sub par employees in the past and as a result, the customer doesn’t always get great service.

Let’s put it another way, when you bring a vehicle that cost you $50 – $60,000, you’re expecting to be treated with a certain level of professionalism.  I’m not expecting a fancy concierge service from a Mercedes dealership.  I just don’t want to hear the, “Oye, te estan esperando…” chusmeria that I’ve come to expect from this service center.

Yes.  I know it’s Hialeah.   So what?  There are thousands of well educated, well mannered, professionals that live and work in Hialeah.  I’ll take a professional “Buenos dias Señor.  Come lo podemos ayudar hoy?”  …over the chusmeria, any day of the week.  On the other hand, if you feel like the chusmeria, then this might be the right place for you.

You might think I’m going off on this dealership.  The reality is I’m cheering for this dealership to improve and grow its rankings.  If anything, I’d love to see Gus Machado Ford spike up and lead the pack when we do our 2022 rankings.  But in order for a place to improve, we have to be honest about what types of improvements need to be made.

Please share your thoughts in the comments section or let us know via social media.

DISCLAIMER:  Our composite scores were acquired on September 13, 2021.  We are not responsible for any errors or omissions.  Our team strives to put the most accurate information that is available to us.  Yelp, Google, and Dealer Rater are registered trademarks of their respective companies.