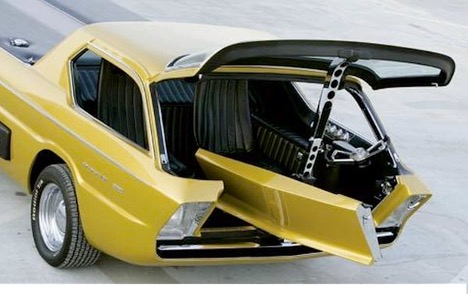 This is a one-of-a-kind — and one of the coolest — cars you’ve never seen. Right out of the Jetsons, this amazing vehicle defies categorization, and frankly, most us thought it was a fictional car deamed up by the folks at Hot Wheels! It’s a dream car! You get in through the front! So cool! The Deora was unveiled during the Detroit Autorama in 1967, where it won nine awards including the Ridler Award.

Life began for the Dodge Deora as a compact Dodge A100 pickup, with the back hatch of a 1960 Ford station wagon serving as the Deora’s windshield! The Dodge pickup was chopped up, re-sectioned, and re-crafted to create the fully functional, futuristic-looking Deora. Its muscular slant six engine and 3-speed manual transmission were moved back 15 inches, behind the seats, out of the cab and into the bed — covered by the hard tonneau. And yes, you get into this highway star by lifting up the freaking windshield, swivelling the lower gate and entering through the front. 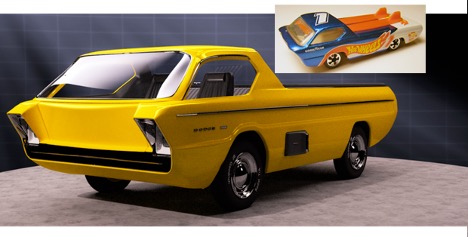 Fun fact: The name Deora came from a naming contest run by AMT model cars. The winning entry was from a 13-year-old boy. The idea for the name “Deora” came from taking the “b” out of Debora, his girlfriend at the time, although many people assume that it came from and is a technically incorrect version of the Spanish word for “golden”.