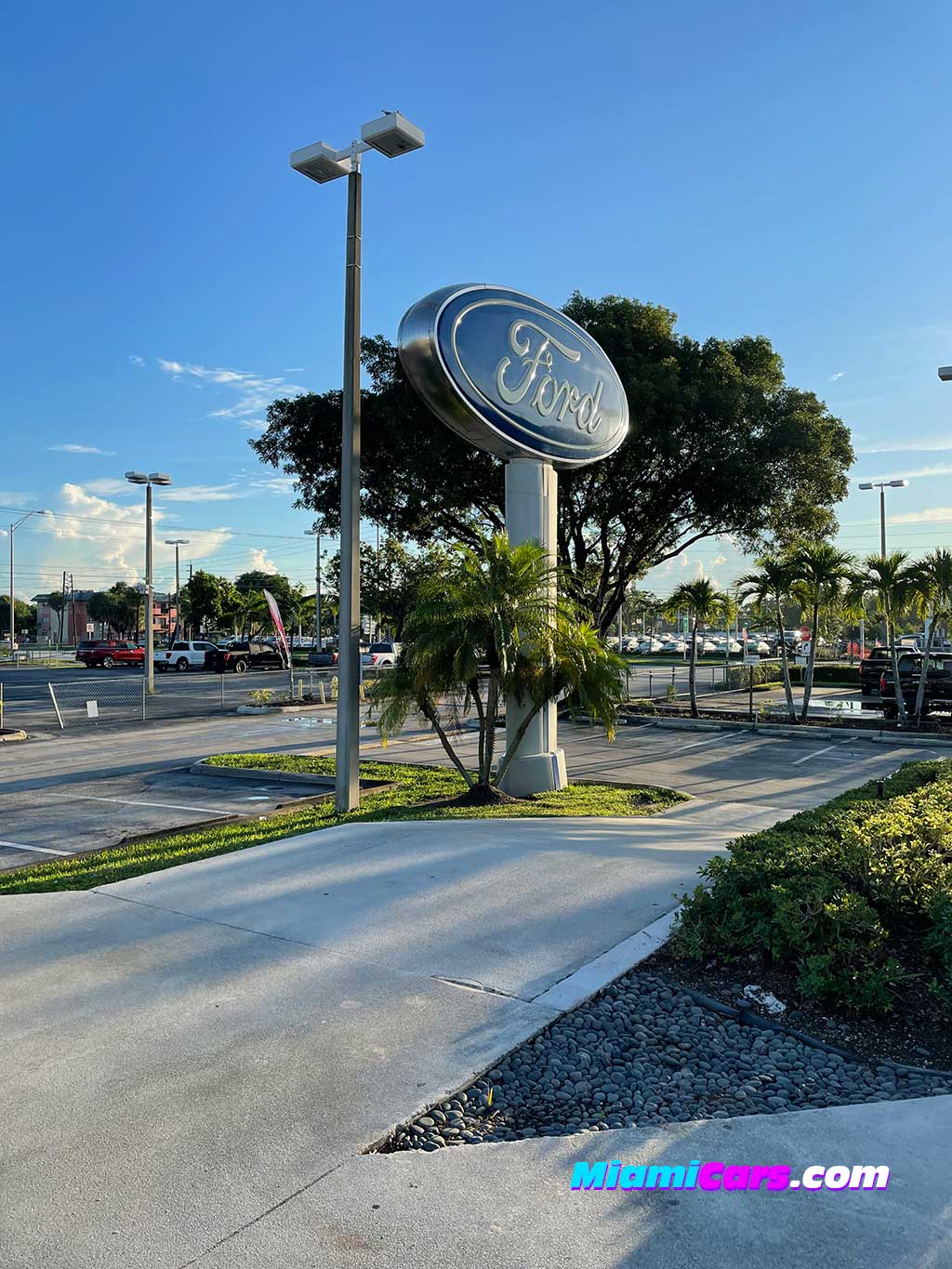 I needed to get an oil change for my wife’s Ford Expedition.  It’s a lease and I figured I’d let the dealer handle the service.  They know these vehicles better than anyone else, right?

I live in Miami Springs.  The closest dealer to me is Palmetto Ford Truck Sales.  I called them and asked if they could service the Expedition on a Saturday.  The operator’s response was that they used to, but only handle mechanical issues.  Apparently they’ve had staffing issues and can’t hire enough technicians to provide oil changes.

I’ll try Midway Ford Miami.  I’ve used them before and have received quality service at this dealership.  However, this dealership was fully booked and I wouldn’t be able to get my oil change for another couple weeks.

Gus Machado Ford is also close by in Hialeah.  However, I’ve been there before and while the technicians are pros, the atmosphere can be a zoo.

So, I called Autonation Ford Miami (ranked #1 Miami Ford Dealership) to schedule an oil change appointment.  While I was on hold I was actually able to setup a 7:15 a.m. appointment for last Saturday.  When the receptionist came on the line, we just confirmed the appointment and I was good to go.

I arrived at the designated appointment time.  A receptionist immediately took my info and asked me to wait inside the lobby to be assisted by a service professional.  The environment was quiet and calm and not the zoo-like atmosphere at Gus Machado.

Fifteen minutes later, I met Orlando, the service pro assigned to help me with my vehicle.  After showing me a $200 and $300 service package to which I replied (unprofessionally by me I might add) “¡Que coño!  I just want an oil change.”  I admit, I should have been nicer and I felt bad as soon as it came out of my mouth.  But inside I’m like, why the heck is this guy showing me a $300 service package?  I realized why afterwards, but will get to that in a minute.

Despite my rude response, Orlando was nothing but a consummate professional.  He took down my information and told me they were backed up due to some vehicles that had been leftover the day before.  He promised me it would take about an hour and a half.  In other words, the Expedition would be ready by 9 a.m.

The lobby was clean, comfortable, and generally quiet.  It was a professional atmosphere.

Knowing it’s going to take a while, I decide to see what their new car inventory is like.  Are they experiencing a shortage at this dealership?  What do they have?  What are they missing? 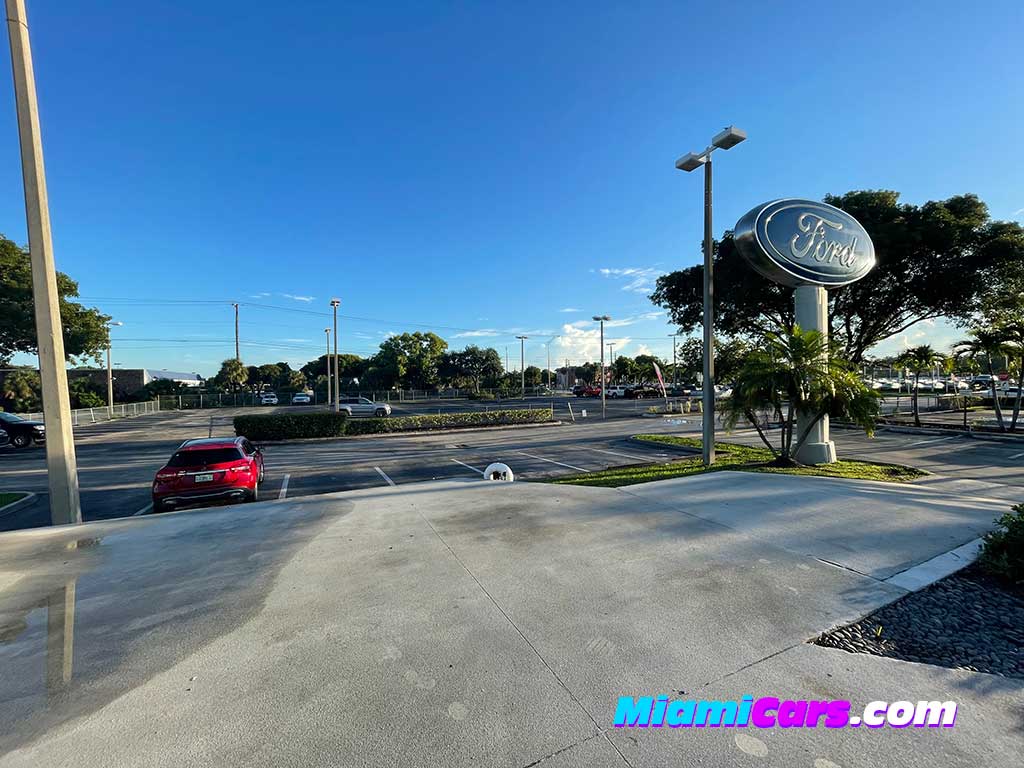 As you can see in the photo above, there’s a big empty parking lot that’s typically full of cars.  But Autonation Ford Miami did have a few new cars like the Mustang Mach E shown below. 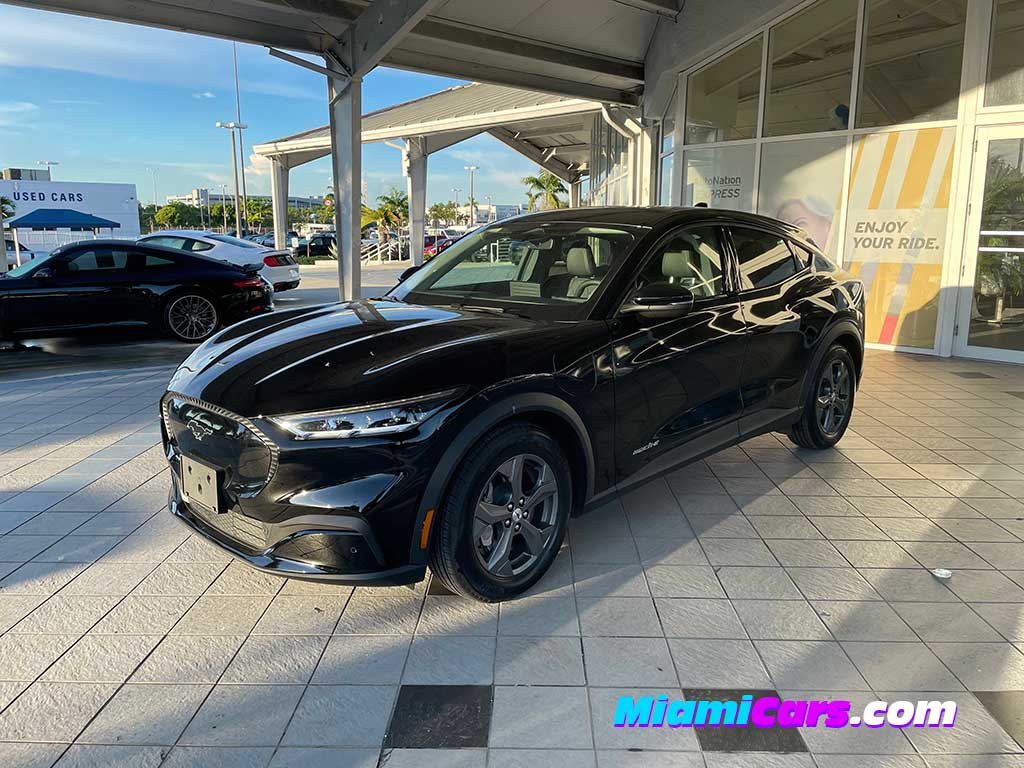 They had this sporty looking Ford Edge. 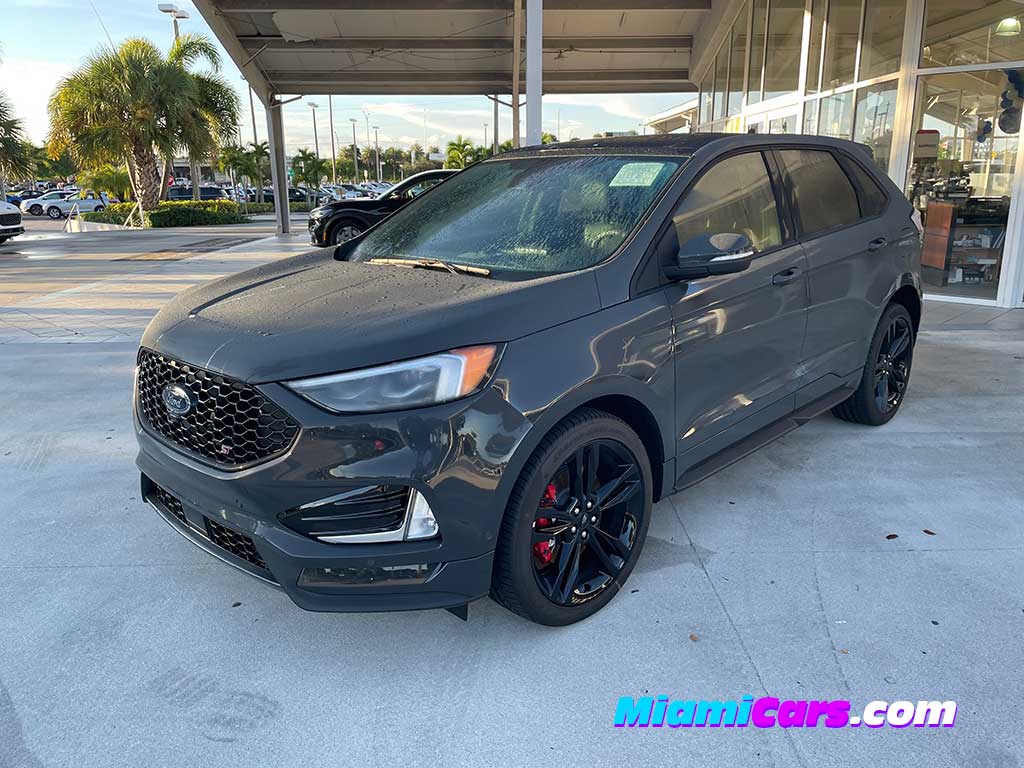 They also had this white 4 cylinder Mustang next to a used Porsche 911. 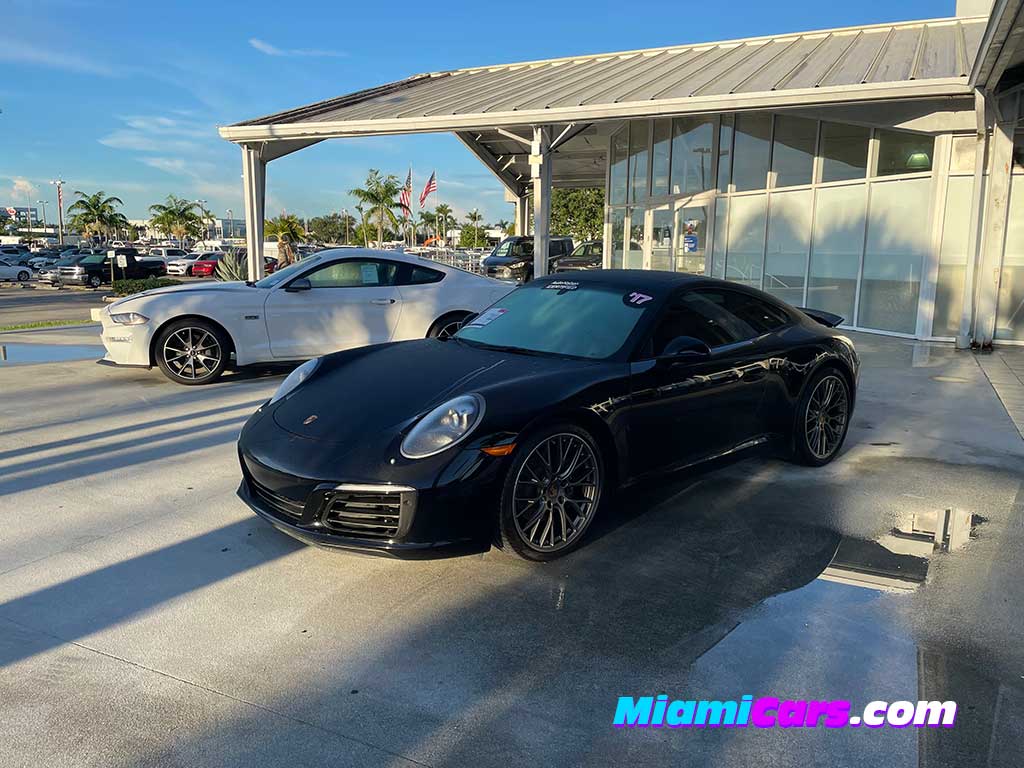 Autonation Ford Miami did have about a half dozen F-150s in-stock. 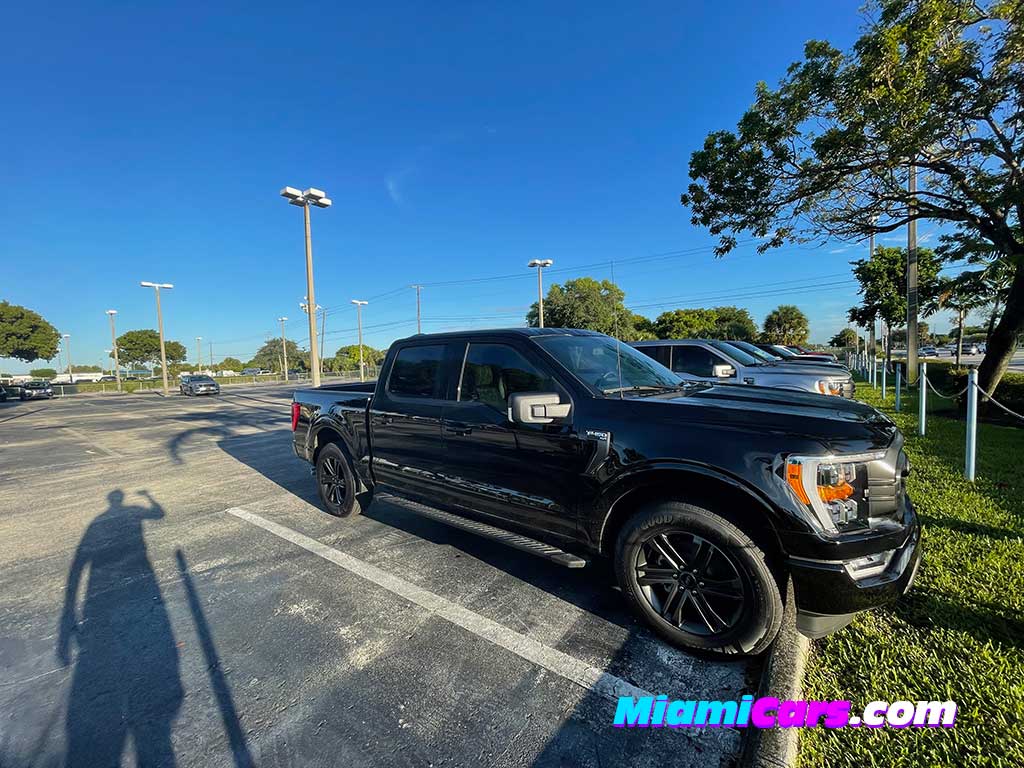 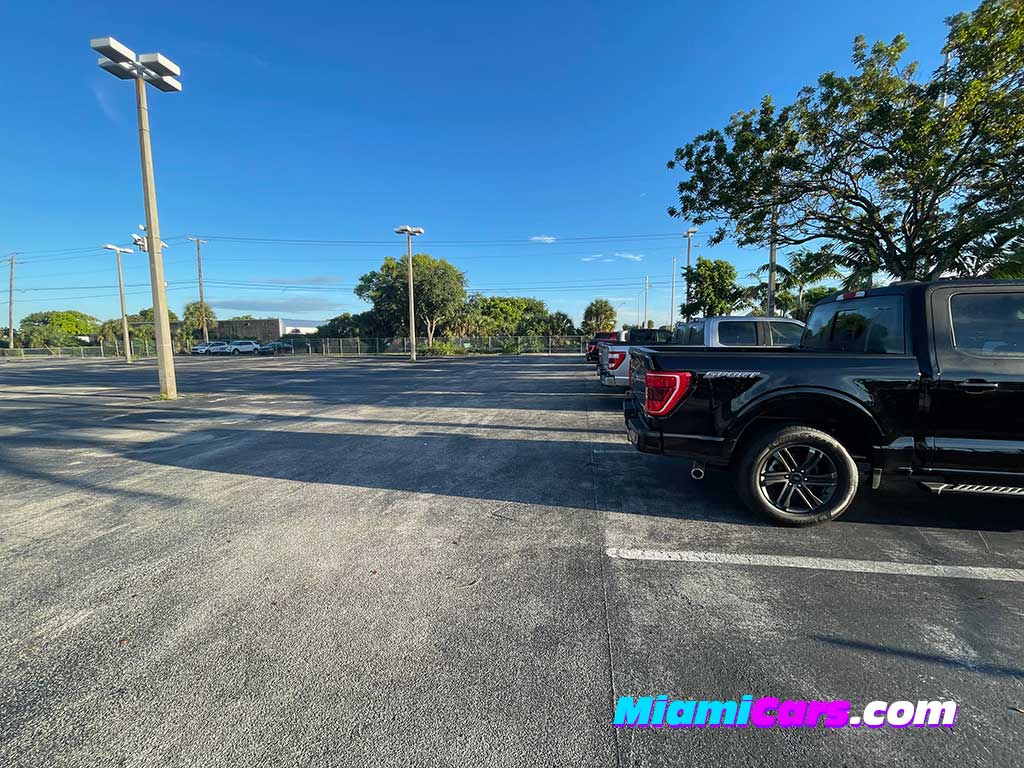 And they had one new Expedition King Ranch edition. 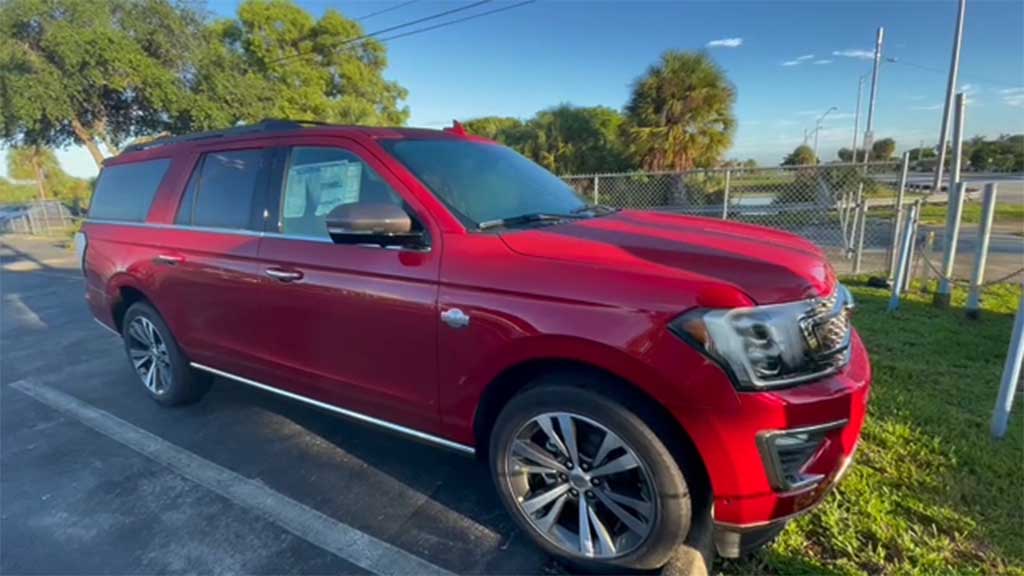 But that’s it.  No Explorers in stock.  No Broncos.  No Super Duties.  I sympathize with the sales people that have no current inventory to sell.  I know they’re still taking deposits on future arriving vehicles.  That seems to be the way people will need to buy cars in this current shortage environment. 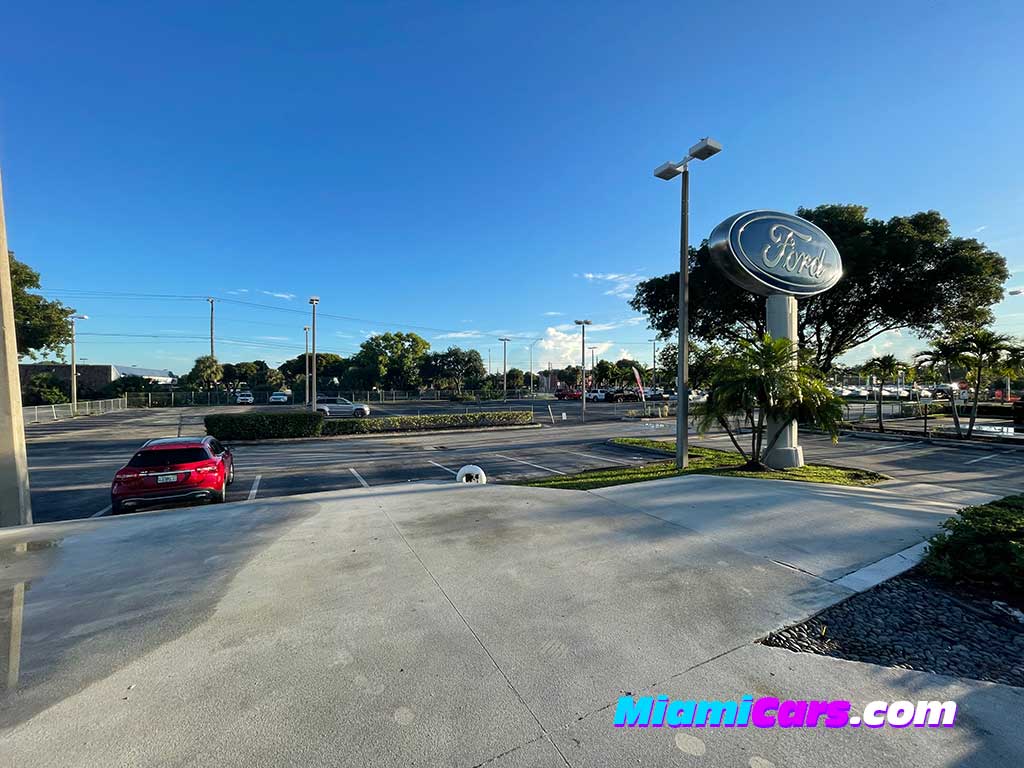 See that early morning sunrise…I told you I was there early. 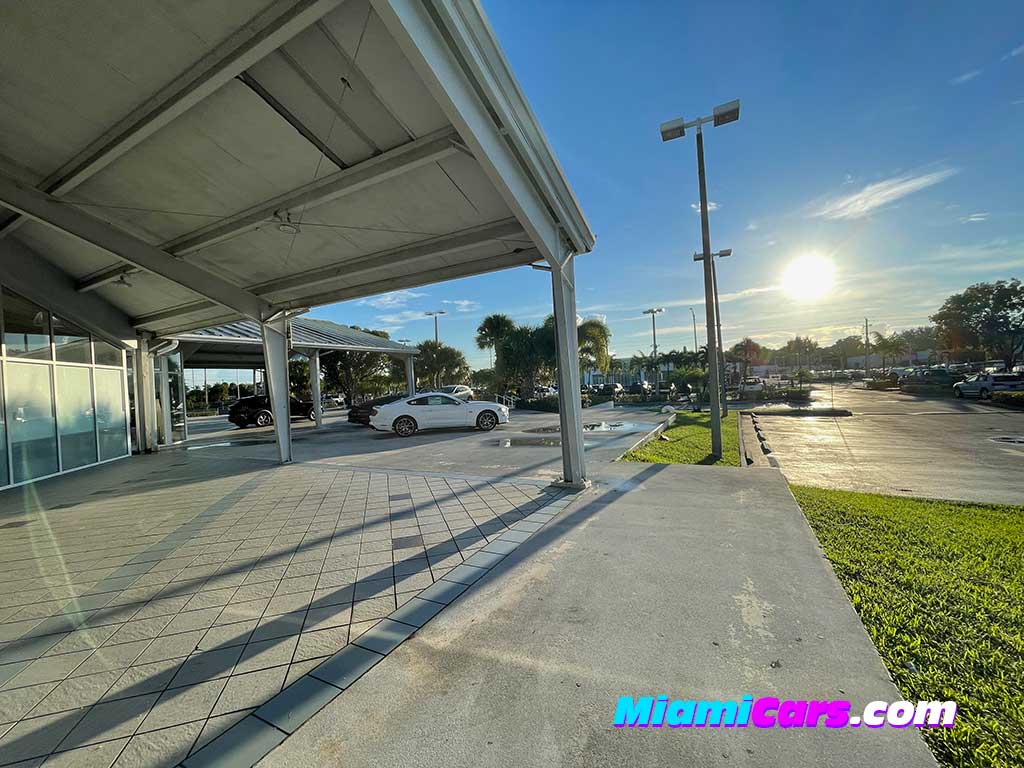 Now they do have used cars available, but expect to pay a lot more than you would have a year ago. 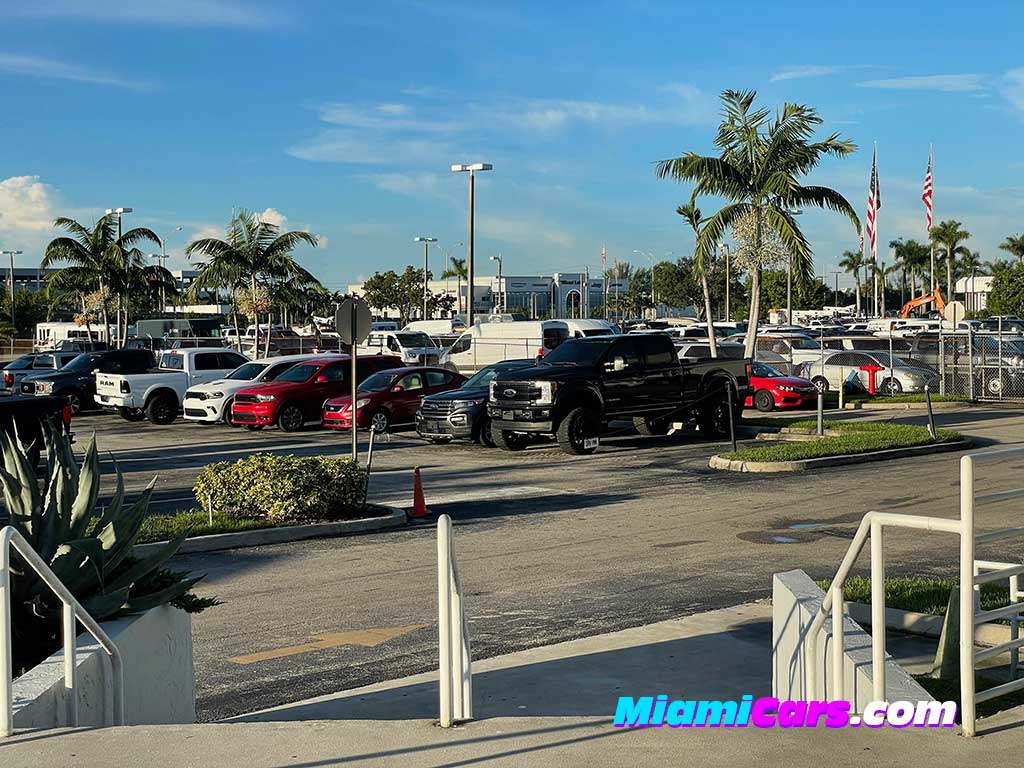 What about the oil change?

Well after walking around and taking a few pics, I headed back to the service area waiting room.  There were a few more people now and it’s getting busier, but it’s organized and professional.  It’s free from loud yelling of one employee calling out to the other “Oye…Fernando…bla bla bla…”

As it gets closer to 9 a.m. I’m starting to get anxious and I don’t see my service professional Orlando anywhere.  Oh boy.

I walk outside.  I look around.  I take a peak at the service bay.  I don’t see my car anymore.  So I walk back into the lobby to see if Orlando has returned.  He hasn’t, but he walks right in behind me.  He tells me, just as promised, your car is ready by 9 a.m.  And he proceeds to write me up.

Orlando has been calm, professional, and very pleasant.  The fact that it took him 11 minutes to write me up is more of the flawed checkout process at Autonation Ford Miami.  I mean he already had all my information, my car’s information.  The expectation is that they’ll ring you up, give you the total and you’re on your way, right.  I don’t know what’s wrong with their Point of Sale system, but it shouldn’t take 11 minutes to ring up an oil change.  Jiffy Lube has mastered this and they get your money in 60 seconds flat.

After finally paying about $100 for the oil change service, Orlando personally went and pulled out my vehicle.  I officially left Autonation Ford Miami at 9:15 a.m.  Two hours after my 7:15 a.m. appointment.

This is a very professional and well run service area.  At least last Saturday, it was pleasant and free from the zoo like atmosphere at “other” Ford dealerships.

It shouldn’t take two hours for a simple oil change.  To be fair, Orlando told me how long it would take and met the expectation.  He was fantastic.

I’ll definitely come back to this station to service my vehicle, but I doubt I’ll be back for an oil change.  I know there’s an employee shortage right now, but come on.  Wasting two hours on an oil change is a bit much when other places can do it far faster.

Autonation Ford, if you want me to change my oil there again, it’s gotta be faster than two hours.  I’m sure I can get it done faster at Pep Boys or Jiffy Lube.

Now, I know inflation is here, but this is the first time I’ve ever paid $100 for a simple oil change.  And my other vehicle is an F-150 with a bigger 5.0 liter engine compared to the Expedition’s smaller 3.5 liter V-6.

Why did I pay so much?  Simple.  I got suckered at the very beginning.

You know when they showed me the $300 service and $200 service that got me really upset.  Yeah, now that $100 oil change seemed cheap.  But in reality, they got me to overpay for a simple oil change.

It’s painful to admit, but that’s exactly what happened. 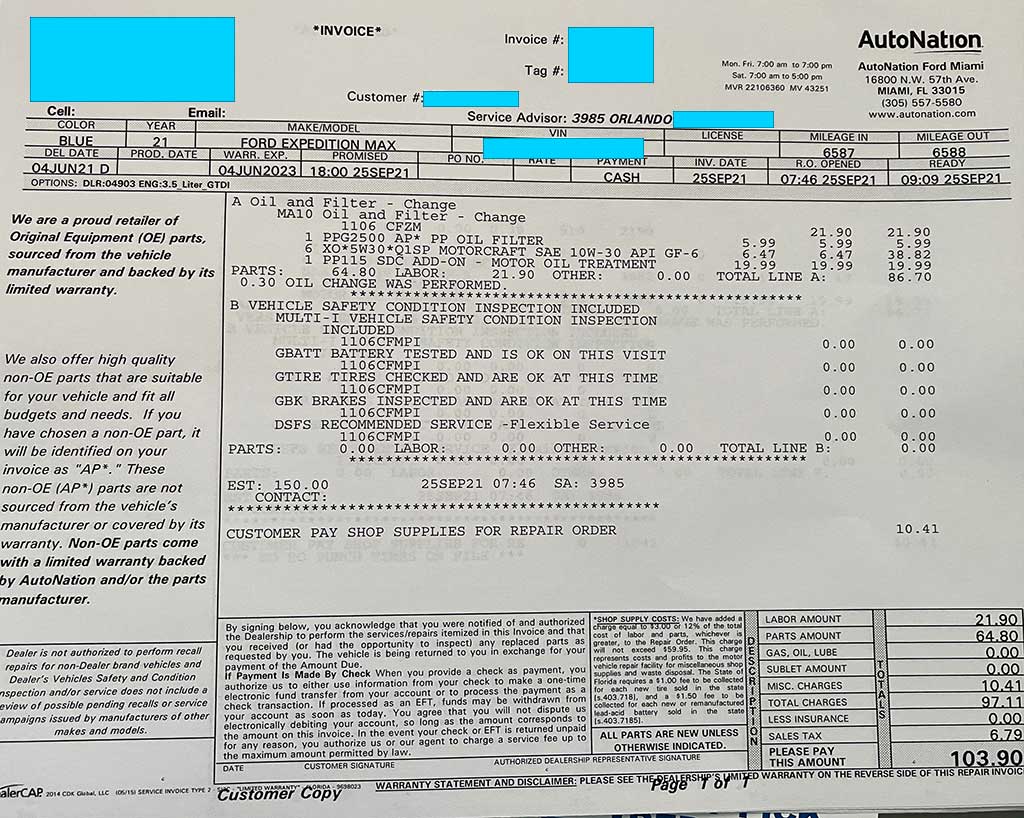 If I was smart, I would have asked for the exact price for the oil change over the phone before ever setting up the appointment.  That was a dumb move on my part.

While I prefer servicing my Ford vehicles at the dealership where they are specifically trained on Fords, I think I’ll save a few bucks and half the time elsewhere.

Here are some offers I found: 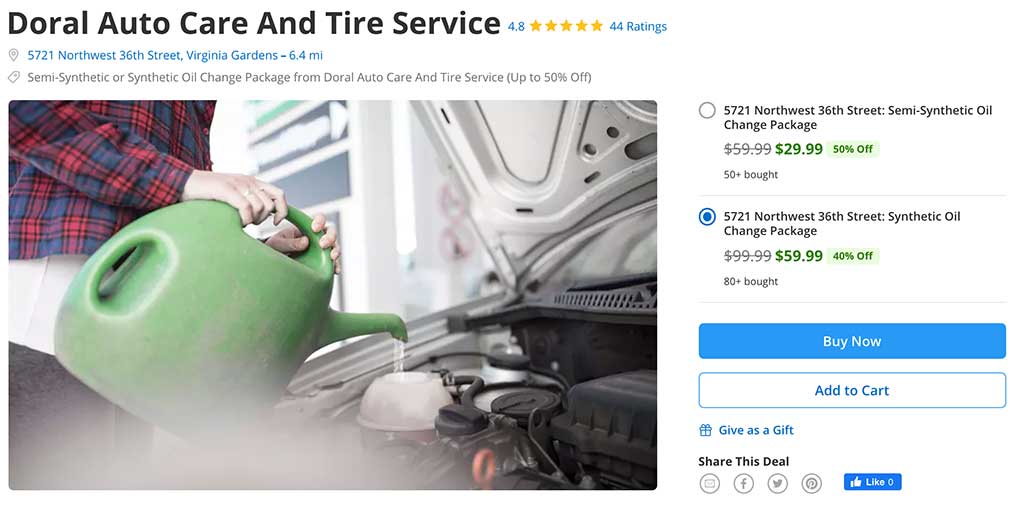 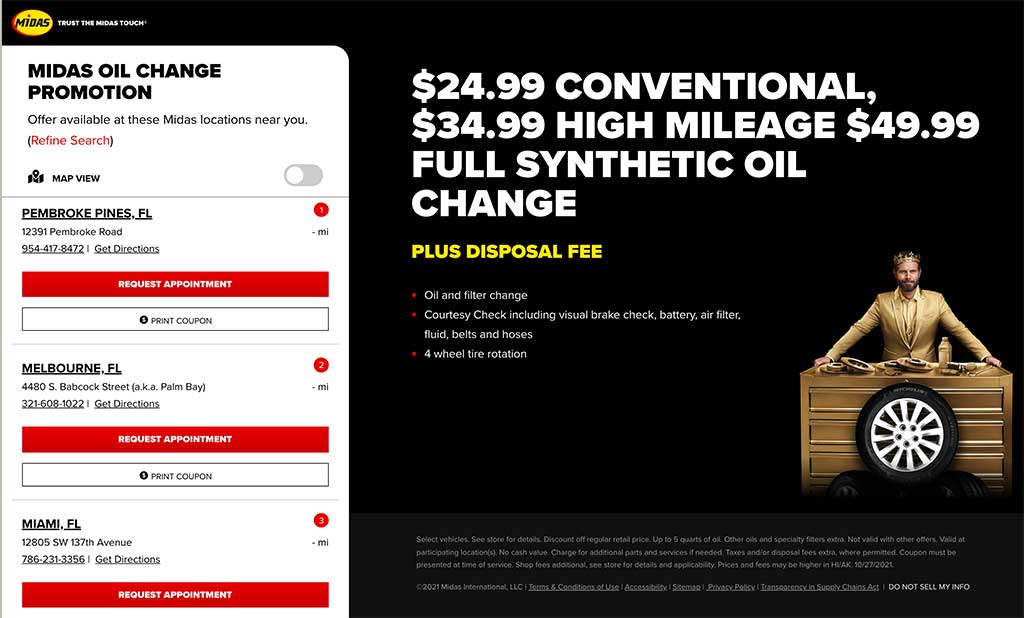 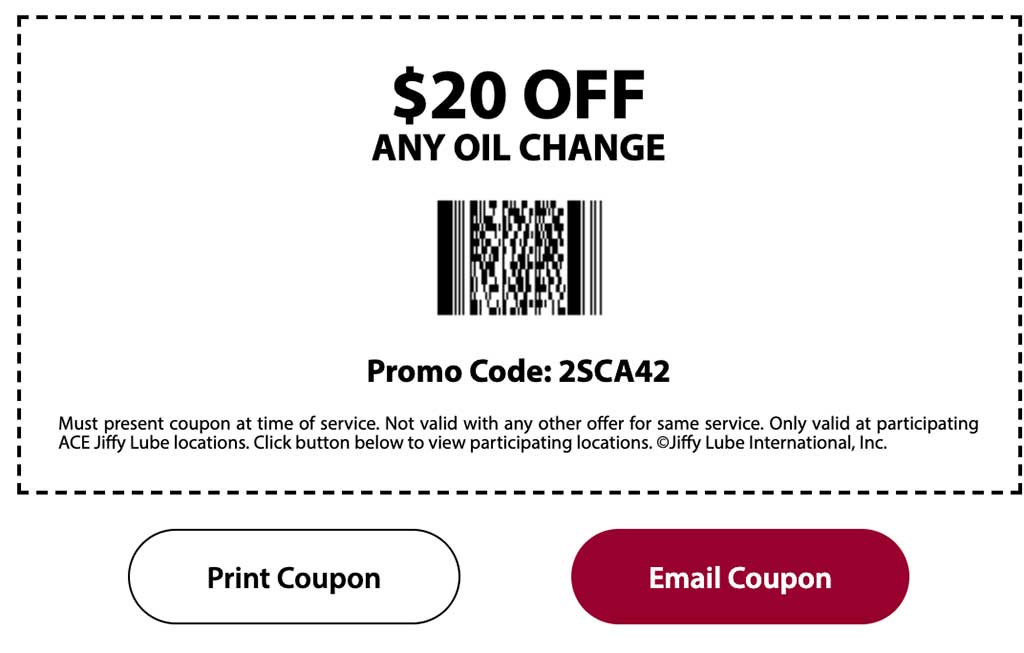 Learn from my mistake and save some money on your next oil change.