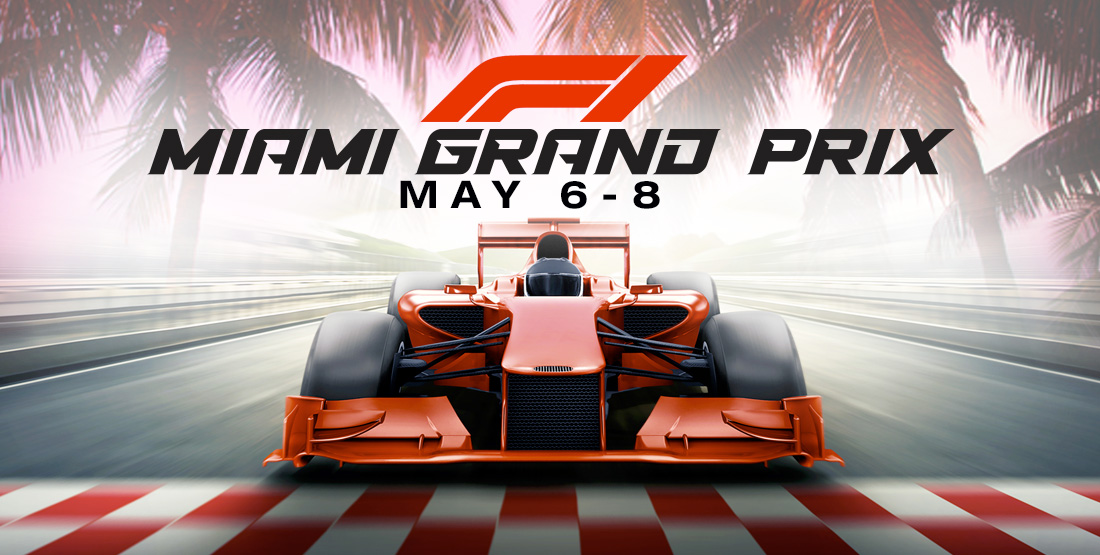 One of The Most Important New Events In Formula 1® Racing

Miami enters the rarified air of Formula 1 racing with the upcoming Formula 1 Crypto.com Miami Grand Prix, May 6-8, at The Miami International Autodrome, hosting its first-ever Grand Prix — the latest chapter in America’s (and Miami’s) long and storied history of hosting top-class motor racing. The Miami International Autodrome, located in Miami Gardens (surrounding the Hard Rock Stadium) took just a little over a year to finish. The result is a state-of-the-art 3.3-mile track, featuring 19 turns, three straights — the longest being over three quarters of a mile in length — and three DRS zones that will test drivers to the limit as they reach top speeds in the region of 191 mph. The Formula 1 Crypto.com Miami Grand Prix is the second race held in the United States on the 2022 schedule. 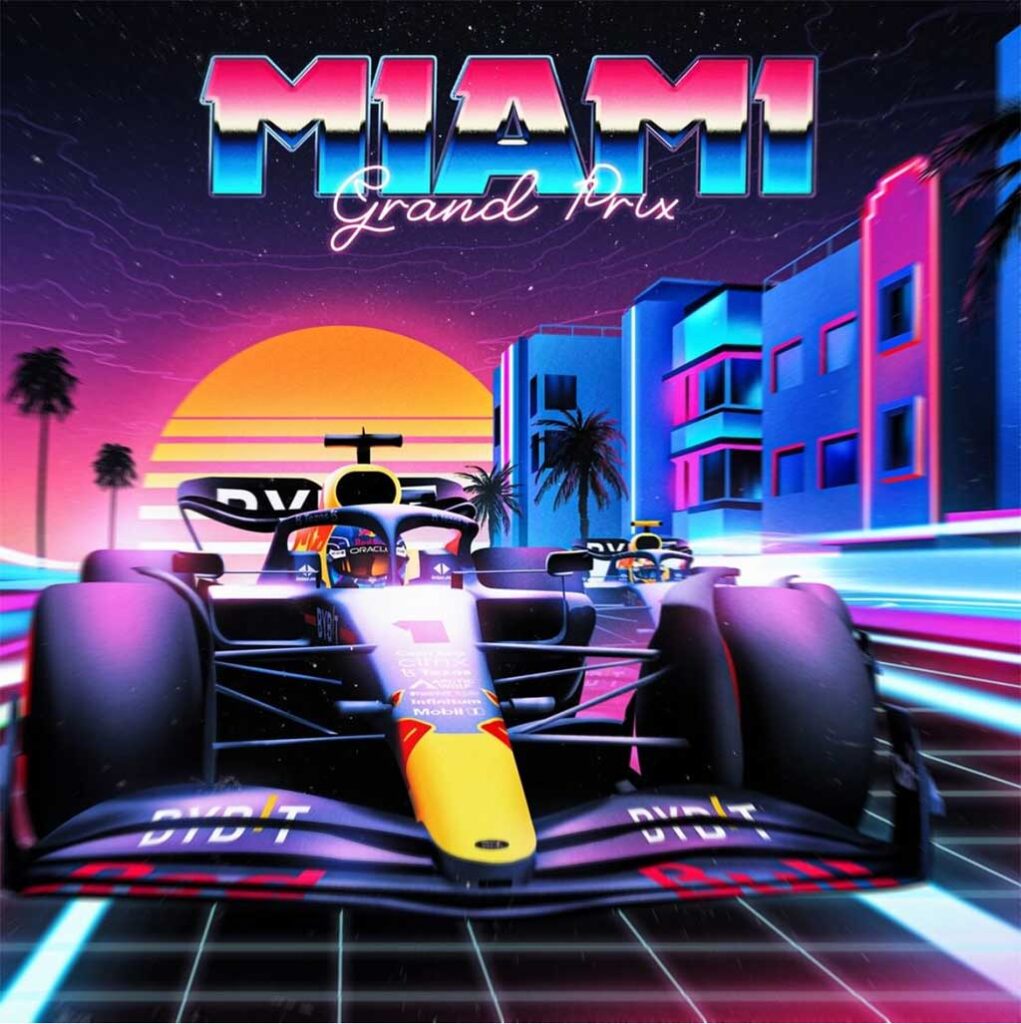 Set in the Hard Rock Stadium complex in Miami Gardens, home to the NFL’s famous Miami Dolphins franchise, the track is a thrilling, 19-turn lap that provides an intentional street circuit feel. The Florida race joining its Texan counterpart in Austin to become the second U.S. race on the calendar – and just the 11th different American venue to host a round of the Formula 1 world championship. By the way, did you know that America’s first Formula 1® World Champion was crowned in 1961 — by Miami-born Phil Hill, driving for the most celebrated team of them all, Scuderia Ferrari. 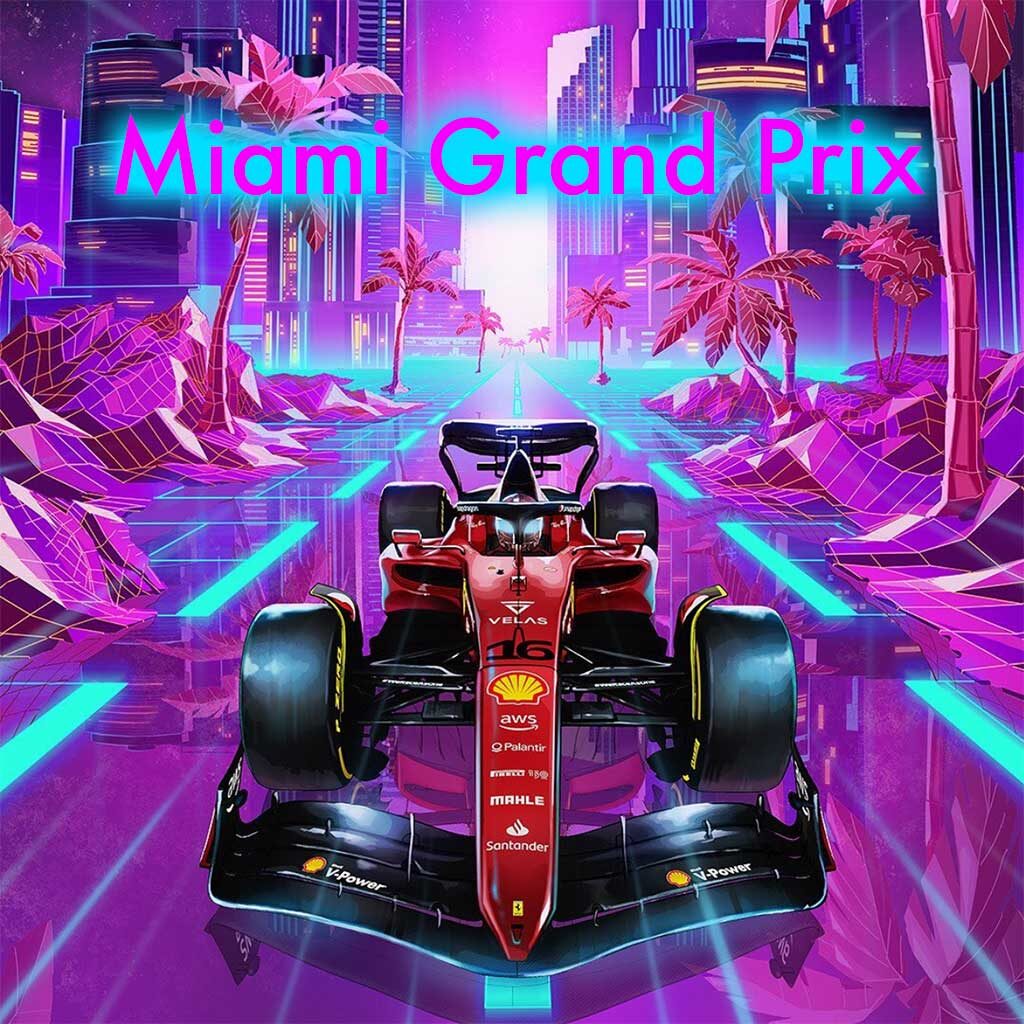 With well over 500 Million fans worldwide, Formula 1 is the highest class and most popular form of auto-racing in the world — on May 6, the sports’ top drivers will be ready to compete and earn points for the coveted F1 World Drivers’ Championship in Miami.

The party’s going to be big! Lots of pre-race events will celebrate the event are planned.

The Formula 1 Crypto.com Miami Grand Prix at the The Miami International Autodrome

In Miami, it’s the auto event of the year. And while tickets for the Grand Prix are sold out, you can get in on the fun by attending one or more exciting racing fan events planned throughout the city. Here’s the race schedule… 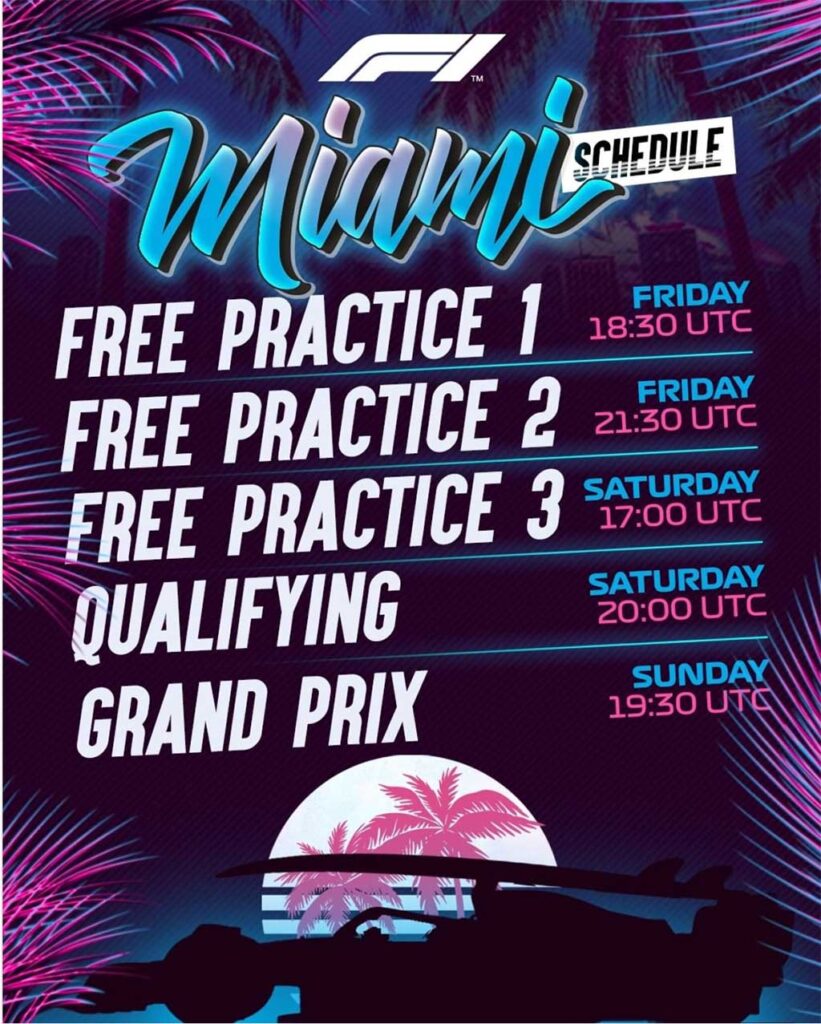 Friday, May 6 Practice day at track for all drivers & teams to get their first real feel of the track

Saturday, May 7 Qualifying day to determine start position and the winner of the COVETED POLE POSITION

Sunday, May 8 Race Day with more than 80,000 racing fans at the Hard Rock Stadium. Stay and walk the track after the race! 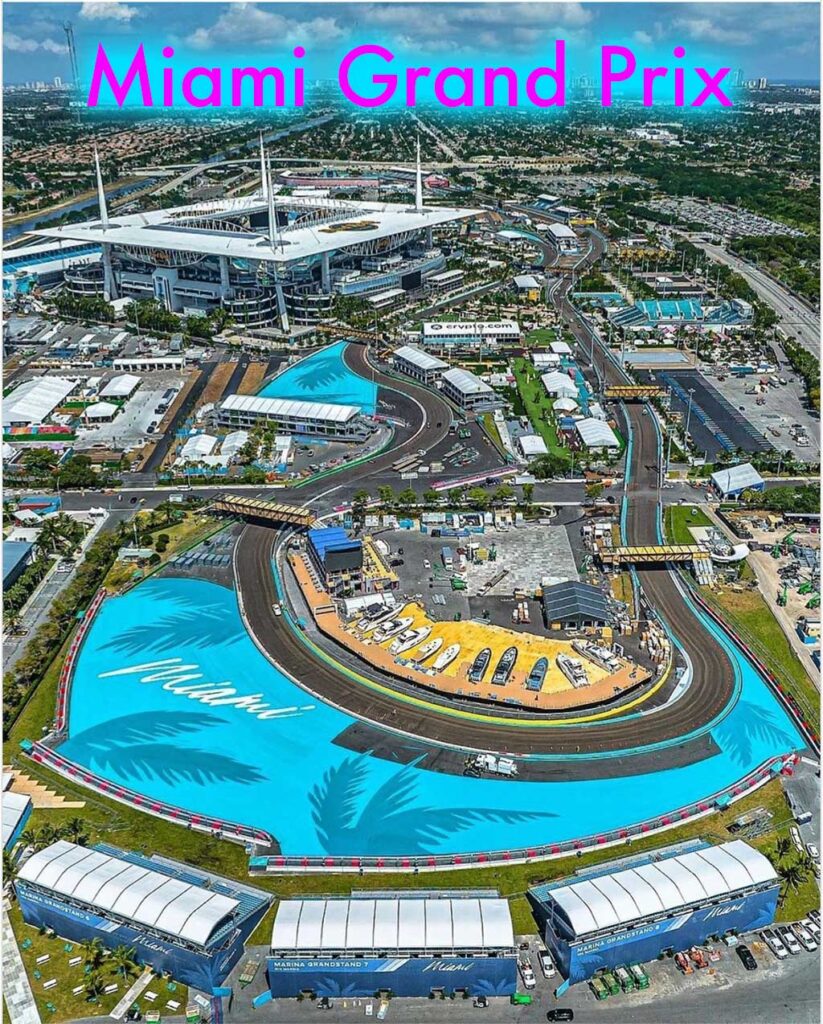 With the Hard Rock Stadium at its “core”, the 3.3-mile layout will feature 19 corners, three straights, potential for three DRS zones, and an estimated top speed of 198 mph — a great street track! There are elevation changes too, the main one found between Turns 13 and 16, with the track heading over an exit ramp and under various flyovers across uneven ground. Turns 14-15 have an uphill approach, with a crest in the middle, and then drops down on exit. That straight open stretch with provide some high-speed, all out racing. 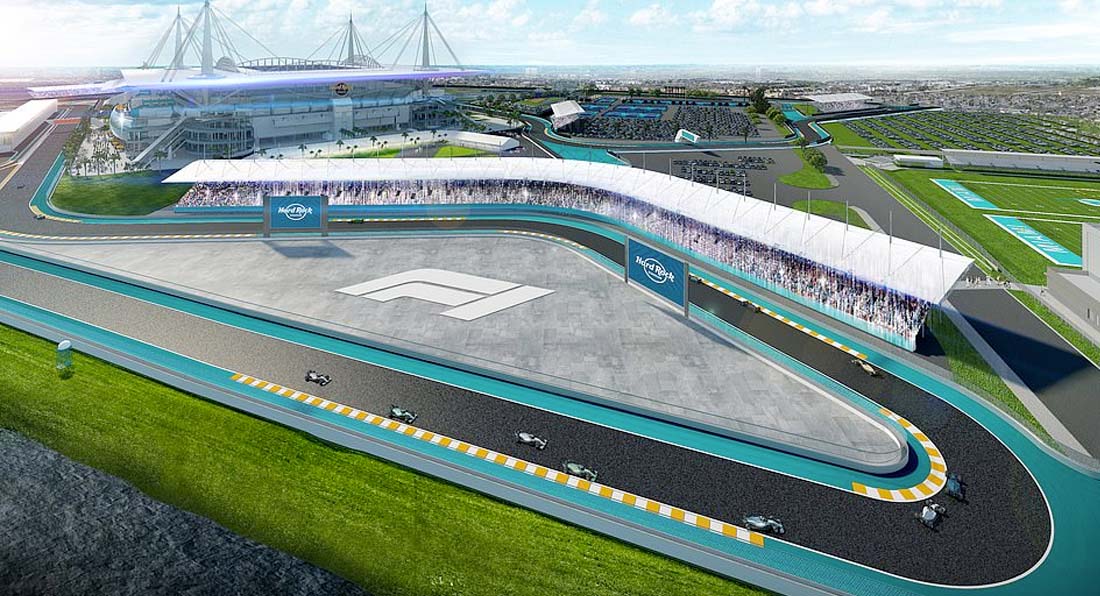 Through the 1980s, Formula 1® in America moved from Long Beach and Watkins Glen to Las Vegas, Detroit, Dallas and Phoenix before going on hiatus in 1992. It would return in 2000 to a new road racing course on the infield of Indianapolis Motor Speedway, where it would remain until 2008. In 2012 a new venue for the US Grand Prix was completed in Austin Texas, the Circuit of The Americas, and then in April 2021 it was announced that Miami would be adding a new destination city to the global F1® schedule.

The super-fast Autodrome: a state-of-the-art track

With predictions of an average speed of 140 mph for the Formula 1 cars, the Miami International Autodrome ranks as one of the faster tracks on the calendar, with Paul Ricard serving as the closest comparison in that department. The venue itself claims to have the second-fastest straight on the calendar, that being the long drag down to Turn 17. The track also boasts a tight and technical section between turns 11-16.

Obviously, much thought has gone into giving all fans the perfect view of the race start, finish and all of the pre-race build-up, in addition to a view of the action in pit lane. The Turn 1 grandstands give fans the chance to watch on from the first overtaking spot of the lap, while also enjoying a view of the start/finish line.

From the Marina Grandstands, guests can enjoy the action at turns 6, 7 and 8 all from the comfort of their seats. These stands also offer access to the general admission areas of the marina where a range of food and drinks can be found. For McLaren fans, the North Marina Grandstand is where you need to be. For the Aston Martin lovers, get yourself in the South Marina Grandstand.

There is a family grandstand at Turn 10, which is also a prime spot to get involved with these Fan Zones and pop-ups.

The fact is, any view is good at The Miami International Autodrome. It’s hard to go wrong. In fact, you could walk around the top deck of the Hard Rock Stadium and see every corner of the track – pretty unique. As for the best passing spots, a seat near Turns 1, 11 or 17 should put you in the thick of the action.

As a founding partner of Formula 1® Crypto.com Miami Grand Prix, Hard Rock International is celebrating the inaugural race in Miami at the Miami International Autodrome with Maluma, Thursday, May 5 at 8:00PM. Maluma is the first of several A-list entertainers announced who are scheduled to perform during race weekend. 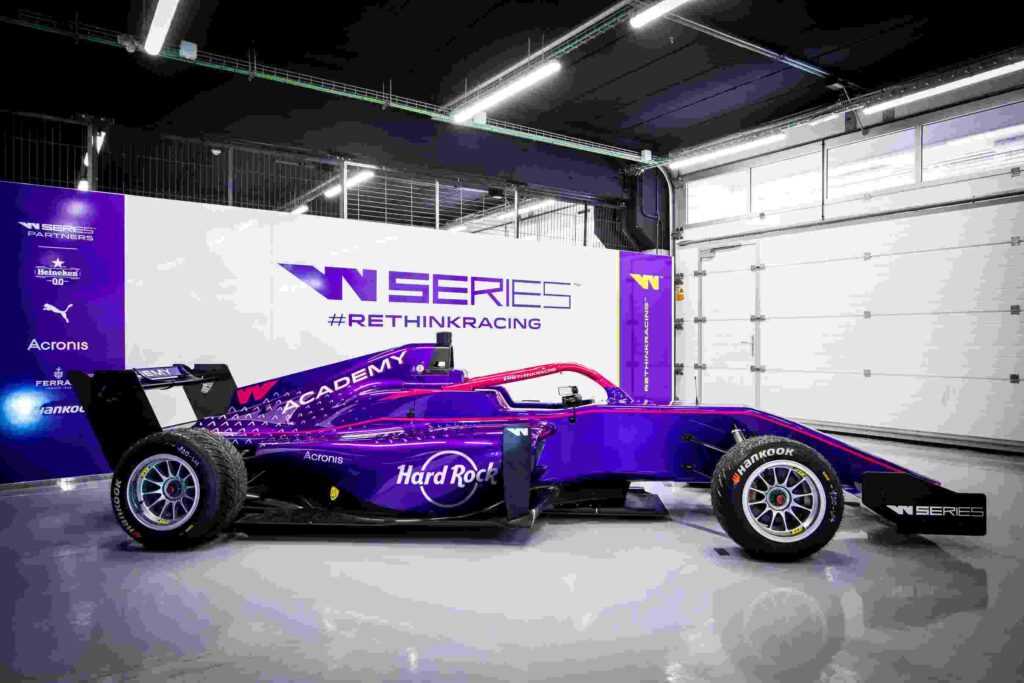